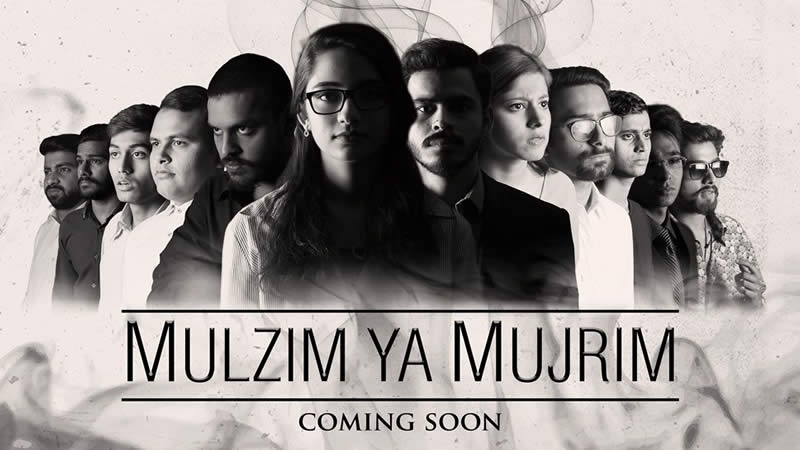 REVIEW Mulzim Ya Mujrim hits the nail right on the head

One would have thought a courtroom drama enacted in the form of live theater would be nothing short of monotonous and would reek of boredom. But with Mulzim Ya Mujrim, the case was entirely different as a troupe of young actors led by director Meezam Naqvy were up to the mark in delivery quality entertainment (interspersed with bouts of laughter) to the audience at NAPA this Tuesday.

Adapted by Wusutullah Khan and based on the Golden Bear winning, American motion picture of 1957 12 Angry Men, Mulzim Ya Mujrim is the story of a dozen jury members who fail to see as one when it comes to a murder case. A son has murdered his father and the heavily-male dominated jury thinks the facts of the case point to only one conclusion that the son is guilty of slashing his father to death with a pocket knife.

One of the two female members of the jury dare disagree with the others and presents a balanced version of the case. Slowly but surely, she is able to win over the diverse members of the jury who are convinced one after the other that all evidences pertinent to the case are either concocted or do not make sense at all. The accused is not presented at all before the audience but the facts of the case are discussed from start to finish so much so that one cannot help but vividly imagine how the crime took place.

One of the most alluring aspects of the play is the fact that there are 12 members of the jury and each character is distinct (in a humorously delightful way) from the other, offering versatility to the audience. There is much to learn from this play that one should never jump to conclusions and that every suspect deserves to be heard in a trail and that the verdict should be a sound one backed on credible evidence. Also the notion, “Every man is innocent unless proven guilty” comes to life in this play.

Without giving away much of the play, one must admire the way Wusutullah Khan adopted it to perfection. The punch lines were delivered with accuracy and the dialogues were laced with potency. Every now and then the theater room would fill with the sound of laughter and clapping. Given the fact that it was a courtroom drama, the audience’s captivation throughout the play in itself is a startling achievement.

The lines were well rehearsed and each stage actor meshed well into the character that he/she was essaying in front of the live audience. The wardrobe went a long way in depicting the diversity of the jury members as well as elucidating laughter from the attendees. The entire cast deserves a pat on the back for impressing the audience throughout the 1hour and 40 minutes that they were on the stage. If you’re in search of quality entertainment that packs a powerful punch and successfully delivers a message, then surely Mujrim Ya Mulzim is one play you don’t want to miss!