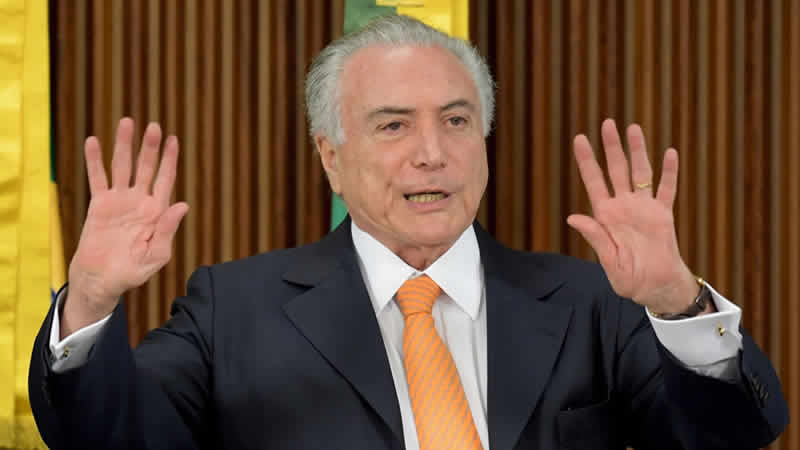 Brazil’s top electoral court postponed on Tuesday for five working days a landmark case on illegal campaign funding that could remove President Michel Temer less than a year after he took over from impeached leftist Dilma Rousseff.

The Supreme Electoral Tribunal (TSE) agreed with a request from Rousseff’s defence team for more time to study a 1,086-page report calling for the annulment of the 2014 election won by Rousseff and her running mate Temer.

Sessions were scheduled over three days, with a final vote by the panel of judges Thursday. However, analysts say there is a high chance that the procedure will be put on hold, staving off the judgment day. At issue are allegations that when then president Dilma Rousseff ran for re-election in 2014, with Temer as vice president, their ticket was financed by undeclared funds or bribes. The leftist Rousseff was herself removed from office last year in an impeachment vote on an unrelated matter, shifting Temer, her conservative coalition partner, to the top seat. Both Temer and Rousseff deny any wrongdoing.

If the court, known as the TSE, rules that the election was fatally compromised by suspect donations, Temer could find his presidency declared invalid. That could force either a snap election or a vote in Congress to pick a new interim leader in Latin America’s biggest country. This would be a bombshell for a country already wallowing in two years of recession and the fallout from the massive “Car Wash” corruption investigation into embezzlement from state oil company Petrobras and high-level bribery and use of political party slush funds. Brazilian media report that the judge overseeing the case, Herman Benjamin, will recommend that the full panel order new elections. However, analysts say there is little chance of a majority vote to bring down Temer.

He would then keep his seat until regularly scheduled presidential polls at the end of 2018. Temer’s center-right PMDB party and allied parties control Congress and they have the backing of big business. Following the Rousseff impeachment, there is little appetite for yet another abrupt change of president just when economic reforms are underway. One way of kicking the can down the road would be if defense lawyers succeed in asking for more time to answer the case. A judge on the court may also decide he needs more time to study the huge quantity of evidence.

Another option is that the court could decide that Rousseff and Temer did take illegal donations but that the evidence does not support annulling their victory. It is also possible that the court will rule to scrap Rousseff’s victory, while finding Temer not guilty and able to carry on. “There’s total calm. The president has time on his side, because there are many legal options,” said a government source, who asked not to be named. Since he took over, Temer has been plagued by rock-bottom approval ratings and a wave of corruption allegations against his close allies. Despite his unpopularity, Temer says he will push through far-reaching austerity reforms to fix the broken budget and serve out the rest of Rousseff’s original term.