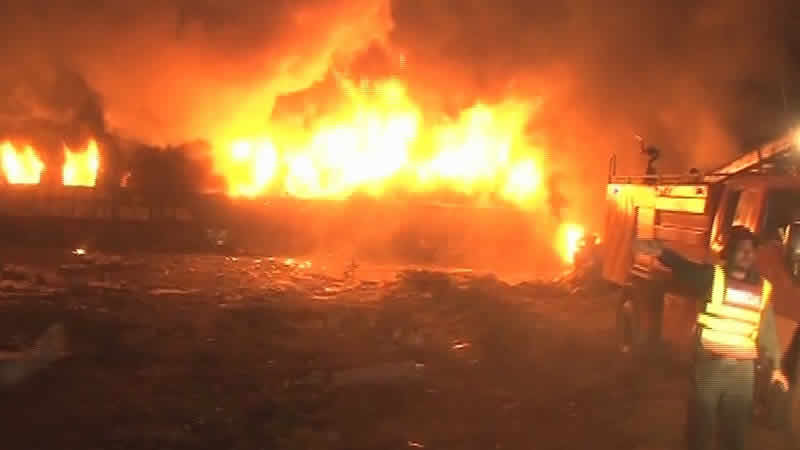 Shalimar Express collided with an oil tanker at a railway crossing near Hiran Minar in Sheikhupura on Monday night, killing at least two people and injuring seven others, Media News reported.

The train was on its way to Karachi from Lahore. Eye-witnesses said that the driver of oil tanker was arguing with the gatekeeper of the railway crossing after parking the vehicle on the railway track and asking him to open the gates when Shalimar Express hit it. At least six bogies of the train caught fire after collision with the oil tanker.

Fire brigade and rescue teams reached the spot and started rescue operation. Eye-witnesses said that rescue operation was stopped after some time as water of the fire brigade vehicles finished. Train driver Abdul Latif and assistant driver Abdul Hameed, who were present in their cabin, died in the accident. It is pertinent to mention here that the passengers of the affected bogies jumped out windows of the burning train to save their lives.

The engine and five bogies of the train were completely destroyed fur to massive fire while fire fighters are still struggling to douse the fire at the site. Federal Railway Minister Khuwaja Saad Rafique has said that the accident occurred as excel of the oil tanker malfunctioned.

He said that driver of the train also died in the accident. Rescue teams shifted the injured to District Headquarters Hospital, Sheikhupura. Meanwhile, emergency has been declared in all hospitals in Sheikhupura. The railway authorities sent a rescue train to bring back passengers of the ill-fated train to Lahore from where they again departed for Karachi on a special train.