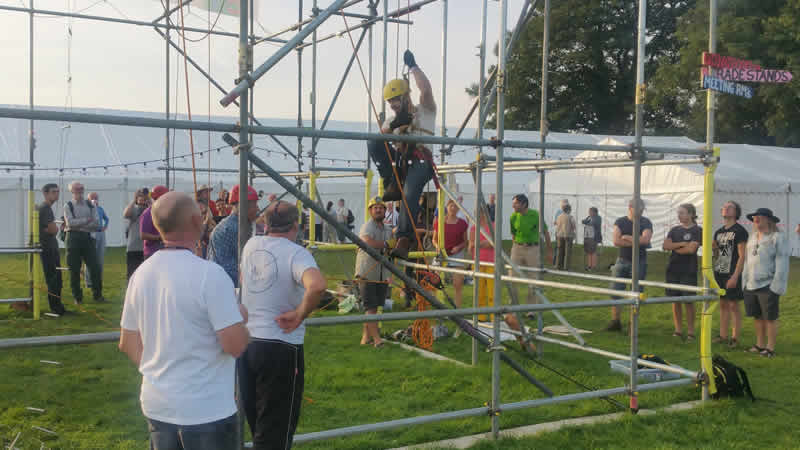 More than 1350 cavers, speleologists and officials from all over the European countries and rest of the world participated in the Conference, President of International Union of Speleology UIS Dr. Kyung Sik Woo and Secretary UIS Fadi H Nader including officials of the UIS from rest of the world were also present in the conference.

It is worth mentioning that Hayatullah Khan Durrani is 1st Pakistan legendry cave explorer and founder of caving and speleological sports in Pakistan he is eminent mountaineer of International repute and founder and patron of Chiltan Adventurers Association Balochistan and Pakistan Cave Research & Caving Federation. Muhammad Abubakar Durrani young explorer and cave photographer and Muhammad Umar Jr. Caver and Director Youth caving trainings were part of the National caving team of Pakistan.

President of UIS Dr. Kyung Sik Woo and Secretary UIS Fadi H Nader hailed the role of Hayatullah Khan Durrani for promotion of caving in Pakistan and they also confirmed official Invitation to Pakistan for Participation in the 17th UIS world General Assembly meeting (ICS) scheduled to be held in July in Sydney Australia 2017.

Hayatullah Khan Durrani presented the commemorative shield to the Secretary UIS Fadi H Nader on behalf of Chiltan Adventurers Association Balochistan and Pakistan cave research and caving federation, Video documentary film titled “Cave and caving in Pakistan.” Directed by Mohammad Abubakar Durrani was show in the Cavers Cinema and was very much appreciated by the cavers and audience. You’ll receive 100% up to 8000 INR when you register an account with the operator. Please note that you’ll need to deposit a minimum of ₹75 to avail of this sports welcome bonus. 1xbet India promo code for all new customers who love betting on sport events. With this voucher, instead of earning a 100% welcome bonus of up to ₹10000, you will get a 30% boost up to ₹13000. You’ll need to permit the operator to send you sports betting. 1xBet bonuses and their attached strings! Detailed and easy visual info on each bonus for India!