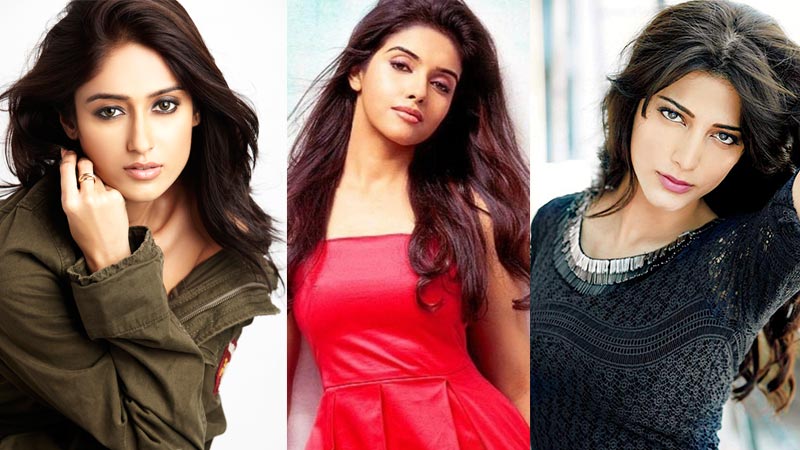 It is believed that the South Indian film industry is all about glamour, action, and drama. The drama and action sure do exist but beyond that it is the glamorous appeal and the hot starlets that attract moviegoers to see South films.

They are beautiful, hot, and talented set of ladies who are popular down south. These beauties reign the hearts of a million audience down south for their acting prowess as well as good looks. Some of them even made a powerful and successful footing into Bollywood. Here is a list of the top 10 hottest South Indian actresses.

Making her acting debut in the 2003 Malayalam film Manassinakkare, she was known as the most promising newcomer of her time. After that, the film was followed with the commercially successful Vismayathumbathu before foraying into Tamil and Telugu cinema. The stunning actress went on to appear in the blockbuster hit film, Ghajini. This gorgeous woman is today one of the most sought after actresses in Tamil cinema. It is easy to be an actress but difficult to be one with a massive fan following. With their dedication, talent, and incredible good looks, these South Indian beauties continue to rule the roost as far as South Indian cinema is concerned.

A perfect package of good looks, sex appeal and talent. She came up with her first release that was the critically acclaimed 2010 Telugu romance film, Ye Maaya Chesave directed by Gautham Menon. After that, she even appeared in several commercially successful Telugu films like Brindavanam, Dookudu, and Chettu establishing herself as a leading contemporary heroine in Telugu cinema. An audience and critics favorite, she is all set to rule the hearts of many.

Her charming smile and sharp features give her a cute and sensuous personality. She made her debut in Y. V. S. Chowdhary’s 2006 Telugu film Devadasu. In this, she bagged the Filmfare Award for Best Female Debut- South. She then went on to appear in blockbusters like Kick, Pokiri, Jalsa, and Julayi establishing herself as one of Tollywood’s leading actresses. In 2012, the stunning actress made her Bollywood debut with Anurag Basu’s critically and commercially successful Barfi! And from that point forward, Ilena has had a dream run in Bollywood.

Her entry into films was marked by her winning the Miss Madras crown in 1999. Following that, Trisha Krishnan made her first appearance in the 1999 Tamil film Jodi, in a supporting role. Here she starred in her first lead role in the 2002 film Mounam Pesiyadhe. In 2010, Trishna finally stepped into Bollywood with her film Khatta Meetha opposite Akshay Kumar. The talented and good looking actress delivered her career best performances in the films Abhiyum Naanum and Vinnaithaandi Varuvaayaa.

This curvaceous actress with an attractive face made her acting debut with the 2010 Telugu film Jhummandi Naadam that was directed by Raghavendra Rao. Since then, she has appeared in some critically acclaimed films such as Aadukalam, Vastadu Naa Raju, Mr. Perfect, and Vandhaan Vendraan. One of her Tamil films called Aadukalam gained maximum commercial success. The young lady stepped into Bollywood with her debut, David Dhawan’s Chashme Baddoor.

Her performance in the Hindi film Ghajini was most critically applauded and praised. But prior to being predominantly seen Bollywood, she began her acting career down south. She made her acting debut in Sathyan Anthikkad’s Malayalam film Narendran Makan Jayakanthan Vaka. The starlet had her first commercial success with the Telugu film Amma Nanna O Tamila Ammayi in 2003. Her chiseled features and toned body makes her a desirable star in the south industry.

One of the finest multi-talented star, this south-Indian actress, singer, and music composer is the cynosure of everyone’s eyes. Superstar Kamal Hassan’s elder daughter, Shruti made her adult acting debut in the 2009 action drama, Luck. After that, she went on to win critical recognition for her role in the Walt Disney fantasy film, Anaganaga O Dheerudu, and 7aam Arivu. This gorgeous and hot actress was seen in the south remake of Dabangg, which also was her first hit as an actress and has currently set her eyes on doing many films in Bollywood.

Do you remember watching her shake a leg with Ajay Devgn in the Hindi film, made her acting debut in the romantic Bollywood film, Chand Sa Roshan Chehra. Thereafter she moved on to work with south-Indian directors. In 2005, she also made her Telugu debut in the film Sri, and in the latter year she was seen in her first Tamil film, Kedi. With the blockbusters Rachcha and Cameraman Ganga Tho Rambabu, she established herself as one of Tollywood’s leading contemporary actresses.

Before her big debut in the south, the lass made her debut in the 2004 Bollywood flick Kyun! Ho Gaya Na in a cameo appearance. Post that, the beauty made a foray into the Telugu film industry through the film Lakshmi Kalyanam. She banked on her first commercial success with Chandamama and rose to prominence after her performance in Magadheera. Without any further delay, she made her comeback in Bollywood with Singham, which was a major blockbuster while her subsequent film Special 26 was also declared a box-office success.

This talented actress is not just a beautiful face but also has a strong acting prowess that is very much evident in the characters she portrays. She has a magnetic personality that comes across on the screen. After making her debut in 2001 with the Telugu film Ishtam, she had her first commercial success with Santhosham. In 2007, Saran gained immense popularity by starring in the Rajinikanth film Sivaji: The Boss. She also earned critical acclaim for her role in the 2007 Bollywood film Awarapan. Her beautiful features and curves make her among the desirable actresses down south.