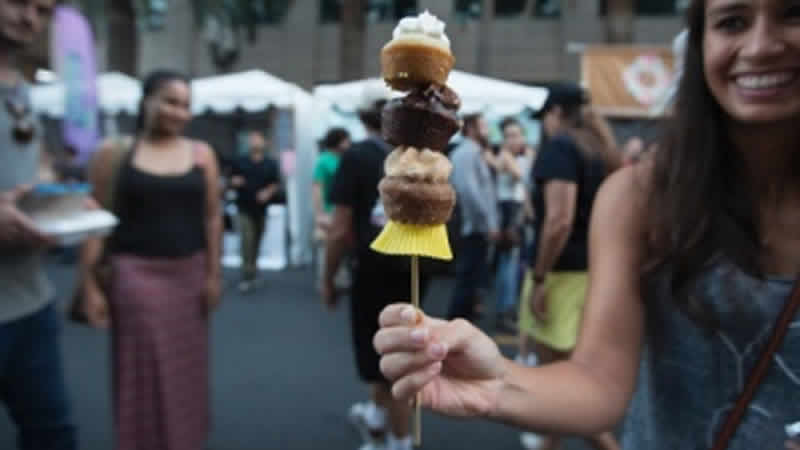 Beyond wheatgrass vegan junk food is all the rage

Vegan diets are considered by most as healthy and environmentally responsible, with celebrity poster children touting benefits like weight loss, clear skin and increased energy.

But even vegans – who eschew all animal products like meat, eggs and dairy – crave junk food.

As the movement becomes more and more popular, temptations including donuts, pizza and mock hamburgers allow vegans to eat just as badly as everybody else. There are a lot of unhealthy options. It’s hard to resist at first,” Jessica McCully, 28, said at a vegan food festival in the Los Angeles area, a fake chicken taco in her hand. McCully is a new convert to “mock meat” thanks to her girlfriend, and says that in just two months of adopting a vegan diet, she feels happier and “more energetic.” According to a Harris Interactive study, between seven and eight million Americans identify as vegan, especially in the US epicentre of clean eating, California. Today’s animal product-free diet goes beyond the stereotypical lentils and granola, with restaurants offering gourmet vegan dishes like watermelon salad with almond cheese and toasted pistachios, or zucchini flowers stuffed with macadamia ricotta. Of course, the diet is not all haute cuisine  there are also plenty of restaurants serving “comfort” vegan food, including tofu or mock meat that has been breaded and fried.

Los Angeles even holds an annual “Vegan Oktoberfest” – allowing vegans to imbibe while sampling from an assortment of indulgent snacks. At the vegan food fair in Anaheim, a suburb of LA, bowls of quinoa are hard to find. Lori Whitaker, a long-limbed blonde with a golden complexion, stood in line at one stand to buy a pizza. “I like my junk food; I won’t lie,” the 54-year-old said. Today, she said, “you can get a vegan pizza, a vegan taco  I think this is great because a lot of people think vegans eat only celery and carrots.” In LA’s hipster Silver Lake neighbourhood, Donut Farm sells sugary, fried confections just like every other donut shop – but their treats in trendy flavours like green tea and salted caramel are vegan. I think a vegan option is still going to be a bit more healthier,” said sales person Chris Boss, who said the bakery’s recipes call for organic flours and sugar, and ingredients like coconut milk. The treats do have less cholesterol and no trans-fats, he added. But at the end of the day, “it’s a ball of fried dough with lots of calories,”

Boss said. Many converts to veganism cite health reasons, but support for animal rights remains a key motivation. Usually it’s with horror at how our factory farming works,” said Annie Jubb, a vegan lifestyle consultant. “It’s motivated by horror and compassion.” But Jubb admits that not all vegans are healthy. They could be eating chips and fried food,” she said. “Eating soy burgers, soy bacon three times a day…soy is not a health food.” The orthodox vegan, who counts Oscar-winning actor Leonardo DiCaprio as one of her past clients, allows herself the occasional indulgence, ordering in a comfort food staple – vegan mashed potatoes with mushroom gravy. We’re in this business to provide people healthy, nourishing food,” said Ryland Engelhart, co-owner of Cafe Gratitude, a California chain of “plant-based” restaurants serving dishes like faux chorizo sandwiches and chocolate-pollen smoothies.

But you can’t expect people to jump overnight to a diet of kelp noodle salad with bean sprouts and sauteed tempeh,” he said. Still, Engelhart said, vegans need to be careful to maintain a balanced diet just like everyone else. It can get to a point where we’re not just transitioning people, but maintaining them into being satiated by non-meat junk food,” he said. “It is still junk food.” The Cafe Gratitude team, though, leans medicinal: at its sister restaurant, the Mexican-themed Gracias Madre, cocktails include ingredients like essential oil of cannabis. We are all about plants, right?” said Engelhart with a smile.