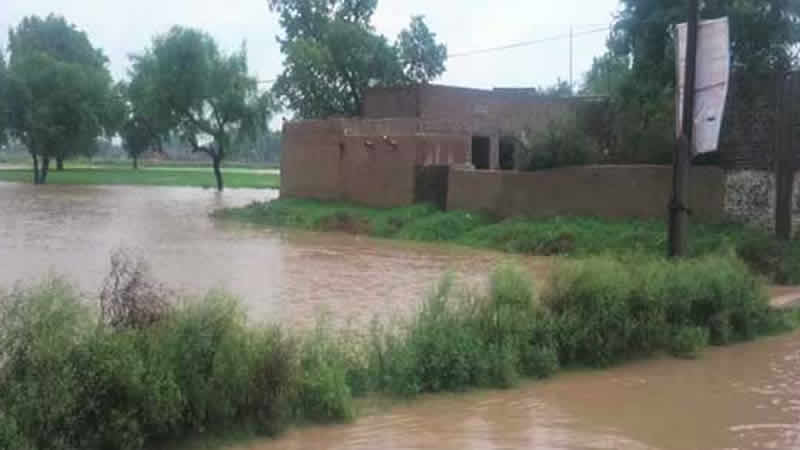 Land connection to around 50 villages in Bijwat area is suspended while several rural localities in Zafarwal are inundated. Crops grown on hundreds of acres of land have been spoiled while a dyke was breached in Mozah Mangwal. Ministry of Water and Power has warned that India issued an alert of flood torrents in Tawi and River Chenab. According to the warning, a torrent of 1,99,000 cusecs is furthering towards Marala. Flood torrent of around 4,00,000 cusecs that hit Marala on Sunday evening is now passing through Qadirabad point. Meanwhile it has been told that Mangla Dam is merely four feet away from its maximum storing capacity of 1,242 feet.

Authorities have decided to not release water in River Jhelum until Mangla Dam exhausts its capacity. Riaz Hussain, General Manager of Mangla project will chair a meeting of the flood committee in Mirpur Azad Kashmir today to discuss the situation. Reportedly, officials are concerned over possibility of a huge flood torrent if water released from Mangla meets Chenab at Trimmu Barrage. The ministry has further warned of a huge flood in River Sindh in last week of August or first week of September.

A torrent sustaining at atleast 4 lac cusecs will pass through Jhang canal on Tuesday. On the other hand, rains have flooded different canals in Balochistan. Authorities have issued high alert for people residing in District Harnai. Large parts of Oathal and Lasbela is flooded while Quetta-Harnai highway has been shut for traffic. Earlier this month, monsoon showers caused water level in Nullah Dek rise to an alarming state. The downpour lashed parts of adjoining Pasrur for four hours and roads and streets were water-logged.