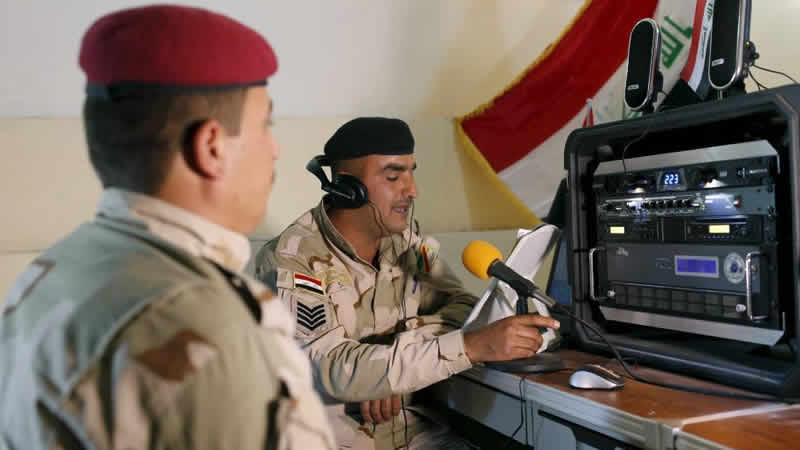 For Iraqis living in the Islamic State stronghold of Mosul, news is dwindling about the U.S.-backed army massing to the south for an assault on the city that could begin this year.

Soon after Iraqi forces established a foothold in the Makhmour area in February, about 60 km (40 miles) from the northern city, the jihadists began restricting access to television for its 1 million-strong population, according to residents.

With limited and erratic access to internet and mobile networks, civilians in Mosul have depended on satellite TV for their primary source of news from the outside world since Islamic State captured the city two years ago. The timing of the crackdown is significant, according to local officials and analysts. They said Islamic State’s aim was to insulate residents and its own fighters from any further news about the advance of Iraqi forces. This could reduce the chances of a co-ordinated uprising against Islamic State in the city and of people who could be used as “human shields” trying to flee, they said, as well as preventing morale among fighters falling. The move reflects the importance of Mosul to the militants; the capital of Nineveh province is the largest under their control and regarded as their de facto capital.

Islamic State wants to prevent its fighters and civilians under its control from learning about its setbacks, said Nineveh provincial councilman Hassan al-Sabawi. They are scared of satellites because they give a realistic picture of the situation,” he said, in contrast to the group’s own one-sided media. Mosul residents say they mostly watch Iraqi TV channels focused on Nineveh like al-Mousalia, al-Sharqiya and Nineveh al-Ghad, as well as pan-Arab stations Al Jazeera and Al Hadath. Islamic State has removed satellite TV receivers from some cafes and markets and said they would be banned from all public spaces in one month, according to five residents contacted over the phone and internet. In early April the group barred the sale and maintenance of satellite receiver boxes for household use, according to two local merchants contacted online.

Three members of the Hisba (morality police) entered my shop and said, ‘From now on buying and selling satellite receivers is prohibited. They are a source of debauchery and immorality’,” one merchant said. The militants also coerce residents into giving up their receivers. One said he turned over his box in order to free a brother arrested for smoking. An elderly widow said Islamic State took hers as a condition for giving her financial aid. Islamic State has even threatened to cut electricity generators used by 80 percent of residents unless they surrender the receivers, three residents said. Omar Dulimi, a Washington-based analyst at the Stabilisation Network who specializes in governance and media in Islamic State areas, said the militants fear Baghdad could use satellite TV to direct residents to safety during the Mosul battle as it did earlier this year in Ramadi, enabling some civilians to avoid becoming human shields. They knew it would be hard to ban satellite TV so they took it in stages.

They know they can’t go to every house and destroy it, so they wanted to first convince people to do it for them,” he said. But the locals don’t want to get rid of their last line of access to the outside world so (Islamic State) has become more aggressive,” he added, predicting there could be physical punishments and home raids in coming months. Islamic State, which seized a third of Iraqi territory in 2014, has been pushed back in the west toward the Syrian border but an army offensive in the north has made slower progress. Iraqi authorities aim to retake Mosul by the end of the year with boosted support from the United States. Increasing restrictions on television in the city have raised the stakes in an ongoing battle waged over the radio airwaves for the past year. At least one private radio station – al-Ghad, which receives funding from former Mosul governor Atheel al-Nujaifi is broadcasting into Islamic State territory. The militant group regularly tries to scramble al-Ghad’s signal by broadcasting over their transmission, said the station’s manager, who declined to be named for security reasons.

Its operators respond by switching to different frequencies. We know media is one of the strongest weapons Daesh (Islamic State) uses, especially inside the city. It is an open war between us and Daesh’s media,” said the manager of the station, which set up transmitters a year ago close to the military frontline south of Mosul. Al-Ghad conducts live broadcasts that residents can call into using Viber or WhatsApp. It also airs programs aimed at fighting radicalism, hosting Islamic scholars who challenge Islamic State ideology. Militants sometimes call in and threaten the broadcasters on air, said the manager. Their main weapon is to build barriers and try to have a siege and make the people inside prisoners by disconnecting them from the whole world,” he said. “So we try to break the siege.”

The Iraqi government waded into the media battle about three months ago with a radio station broadcasting from a concrete shelter at the Makhmour army base. Soldiers run the radio for around eight hours a day, transmitting religious prayers, patriotic songs, news broadcasts and pre-recorded messages. We tell them ‘We are close to you, we are coming to liberate you and save you,” one of the operators told Reuters during a visit last month. Islamic State quickly scrambled the station’s signal, “so the scrambler was bombed”, he said. But the signal currently only reaches halfway to Mosul. The operator said transmitters would be moved closer to the city as the army advances, but so far Iraqi forces have taken only four villages since launching operations from Makhmour a month ago.