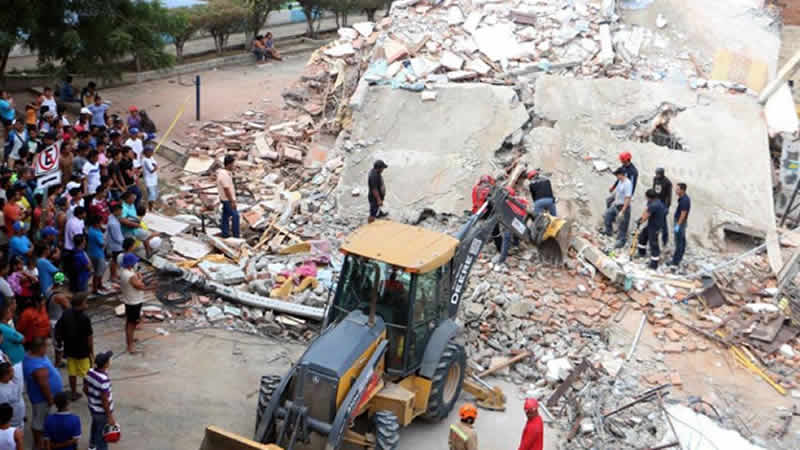 The death toll from Ecuador’s biggest earthquake in decades soared to at least 233 on Sunday as rescuers using tractors and bare hands hunted desperately for survivors in shattered coastal towns.

The 7.8 magnitude quake struck off the Pacific coast on Saturday and was felt around the Andean nation of 16 million people, causing panic as far away as the highland capital Quito and collapsing buildings and roads in a swathe of western towns.

President Rafael Correa, who was rushing home from a trip to Italy, said the confirmed number of fatalities rose on Sunday to 233. “The immediate priority is to rescue people in the rubble,” he said via Tiwtter. More than 1,500 people were injured, authorities said. Coastal areas nearest the quake were worst affected, especially Pedernales, a rustic tourist spot with beaches and palm trees. Information was scant from there due to poor communications and transport chaos. “There are people trapped in various places and we are starting rescue operations,” Vice President Jorge Glas said on Sunday morning before boarding a plane to the area. A state of emergency was declared in six provinces. “There are villages totally devastated,” Pedernales’ mayor Gabriel Alcivar told local radio, adding that “dozens and dozens” had died in the rustic zone.

“What happened here in Pedernales is catastrophic.” Authorities said there were 135 aftershocks in the Pedernales area. One photo on social media purporting to be the entrance to Pedernales showed a torn up road with a crushed car in the middle and people standing behind. Local TV station Televicentro broadcast images from Pedernales showing locals using a small tractor to remove rubble and also search with their hands for people buried underneath. Women cried after a corpse was pulled out. Locals said children were trapped. One man begged for help: “Pedernales is destroyed.” In Guayaquil, Ecuador’s largest city, rubble lay in the streets and a bridge fell on top of a car. “It was terrifying, we were all scared and we’re still out in the streets because we’re worried about aftershocks,” said Guayaquil security guard Fernando Garcia. About 13,500 security force personnel were mobilized to keep order around Ecuador, and $600 million in credit from multilateral lenders was immediately activated for the emergency, the government said. Ramon Solorzano, 46, a car parts merchant in the coastal city of Manta, said he was leaving with his family.

Photos from Manta showed Red Cross workers arriving, police hunting through debris, a smashed sculpture and badly-damaged buildings. “Most people are out in the streets with backpacks on, heading for higher ground,” Solorzano said, speaking in a trembling voice on a WhatsApp phone call. “The streets are cracked. The power is out and phones are down.” Parts of the highland capital Quito were without power or phone service for several hours but the city government said those services had been restored and there were no reports of casualties in the city. The government called it the worst quake in the country since 1979. In that disaster, 600 people were killed and 20,000 injured, according to the United States Geological Survey. Among international aid, Venezuela and Mexico were sending personnel and supplies, the Correa government said. A tsunami warning was lifted on Saturday night but coastal residents were urged to seek higher ground in case tides rise. “At first it was light, but it lasted a long time and got stronger,” said Maria Jaramillo, 36, a resident of Guayaquil, describing windows breaking and pieces falling off roofs. “I was on the seventh floor and the light went off in the whole sector, and we evacuated. People were very anxious in the street … We left barefoot.”

The OPEC member said oil production was not affected, but closed its main refinery of Esmeraldas, located near the epicenter, as a precautionary measure. The Ecuadorean quake followed two large and deadly quakes that struck Japan since Thursday. Both countries are located on the seismically active “Ring of Fire” that circles the Pacific, but according to the US Geological Survey large quakes separated by such long distances would probably not be related. “Even the earth’s rocky crust is not rigid enough to transfer stress efficiently over thousands of miles,” it said on its web site. Quakes can cause other big quakes within a range of hundreds of miles, but can cause only small, brief quakes at a distance of thousands of miles, it said.