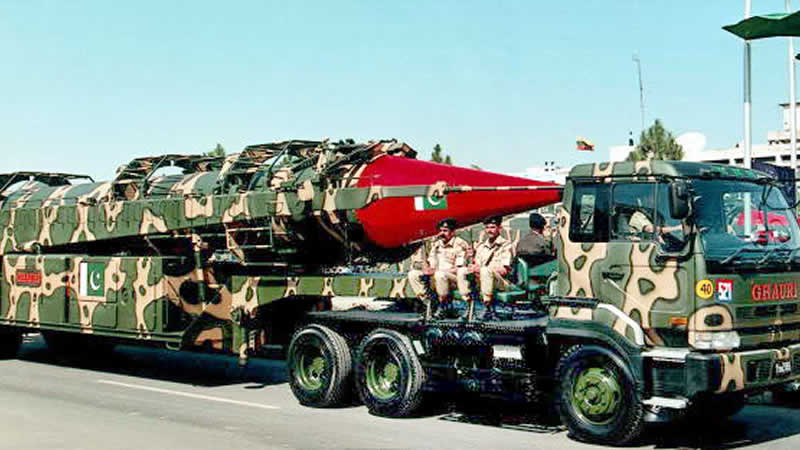 The Report “Preventing Nuclear Terrorism: Continuous Improvement or Dangerous Decline?” was released ahead of fourth nuclear security summit scheduled for end of this month.

The report warns Pakistan against the risk of a nuclear theft, but expressed satisfaction over the measures in place to ensure the safety of nuclear weapons. “By some estimates, the Strategic Plans Division, which manages Pakistan’s nuclear weapons, has 25,000 troops available to guard Pakistani nuclear stocks and facilities. 82 Pakistani officials report that sites are equipped with extensive barriers and detection systems, that the components of nuclear weapons are stored separately and that Pakistani weapons are equipped with locks to prevent unauthorized use.” said the report. The report also pointed out to the unstable political situation in Pakistan, “The possibilities of state collapse or extremist takeover cannot be entirely ruled out, though the near-term probability of such events appears to be low”.

It is notable, however, that these statements of confidence have not been repeated at recent high-level U.S.-Pakistani meetings suggesting that the United States has concerns about some elements of Pakistan’s nuclear security approach. The Director of the U.S. Defense Intelligence Agency, however, testified in February 2015 that improvements were continuing.” The report stated.  On the occasion of sixth ministerial level strategic dialogue between Pakistan and United States in February, US Secretary of State John Kerry, in his opening remarks, had asked Pakistan to realize that keeping a large nuclear programme “does not make sense” and that Pakistan needs to “process that reality and put it front and centre in its policy”. He also expressed hope that both countries will continue to discuss the obligations of being a responsible nuclear state. Speculations arose in the media that United States and Pakistan had differences over nuclear security issues and that US was pushing Pakistan to cut down on its nuclear programme.

Prime Minister’s Advisor on Foreign Affairs Sartaj Aziz told the house that “We have clearly told the US that our nuclear programme is for our own security and it has by and large helped prevent an armed conflict in the region”. He made the remarks during a debate on the statement of US Secretary of State John Kerry that Pakistan might sell nuclear bombs to Saudi Arabia. Sartaj Aziz denied the speculations and said that Pakistan’s nuclear program is not for sale. He also added that the statement of the US Secretary of State was misquoted by the media. Sartaj Aziz informed the house that Pakistan will not lend its nuclear technology to any other country. He added that Pakistan s nuclear programme is for its own deterrence and entire world appreciates its impeccable command and control system.

“We enjoy friendly relations with Saudi Arabia, but under no circumstances Pakistan will share its nuclear technology with any other country”, Mr. Aziz informed the house. Last week, Pakistan hosted a Nuclear Safety Training Conference in which officials from 29 countries participated, it was the first of its kind conference held outside International Atomic Energy Association (IAEA) headquarters. United States has praised Pakistan nuclear engagement with the IAEA. US Under Secretary of State for Arms Control and International Security Rose Gottemoeller told members of the Senate Foreign Relations Committee during a congressional hearing that Pakistan’s nuclear engagement is excellent for safeguarding its nuclear assets. Another significant development was recorded as Pakistan ratified the 2005 Amendment to the Convention on the Physical Protection of Nuclear Material (CPPNM) on the recommendation of National Command Authority (NCA).

The original CPPNM, which entered into force on 8 February 1987, is a legally binding international instrument in the area of physical protection of nuclear material. It establishes measures related to the prevention, detection and punishment of offences related to nuclear material.  Last Month, the Marshall Islands- a small pacific island nation, filed cases against Pakistan, India and Britain before the International Court of Justice stating that “Pakistan is in breach of its obligation owed to the international community as a whole, when it comes to reducing its nuclear arsenal.” The lawyers informed the court that “even a limited nuclear war involving the two countries would threaten the existence of small Pacific Island nation”, reported the agencies. It is necessary for every nation on the earth to process the reality that nuclear weapons symbolize only destruction. In order to ensure a safer future, all nations of the world must come together to get rid of this menace. It is absolutely essential that the possibilities of armed conflicts be minimized and eventually eliminated for human race to progress and prosper.