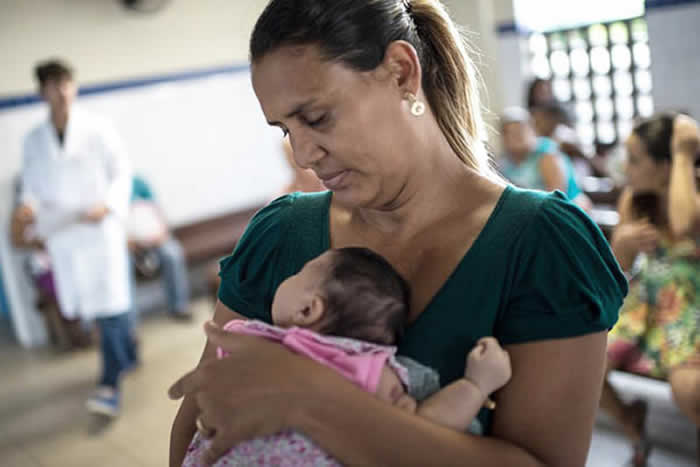 Overweight or obese women give birth to larger babies, says new research which could make some pregnant women think twice before reaching for that box of ice cream.

Mothers with high blood sugar or diabetes, even within a healthy range, also tend to have bigger babies, according to a study published Tuesday in the Journal of the American Medical Association.

Conversely, having higher blood pressure during pregnancy causes women to deliver smaller babies, researchers at the British universities of Bristol and Exeter, who led the study, found. “Being born very large or very small can carry health risks for a newborn baby, particularly when that’s at the extreme end of the spectrum,” said Rachel Freathy of the University of Exeter Medical School, who co-wrote the report. Understanding which characteristics of mothers influence birth weights may help reduce the number of babies born too large or too small, she added.

The researchers examined data from more than 30,000 healthy women and their babies across 18 studies. All the women had European ancestry and lived in Europe, North America or Australia. They gave birth between 1929 and 2013. The researchers examined genetic variants associated with womens’ body mass index, blood glucose and lipid levels and blood pressure, together with measurements of those characteristics during pregnancy and babies’ birth weights. A four-point higher body mass index (BMI) for mothers results in a 1.9 ounce (54 grams) higher birth weight for babies, the study found. Researchers also determined ratios for correlations between higher glucose levels in mothers’ blood and higher birth weights, as well as higher blood pressure in mothers and lower birth weights.

“The estimated associations between these maternal traits and birth weight (either increased or reduced) are substantial and of clinical importance,” the authors wrote. “They support efforts to maintain healthy gestational glucose and blood pressure levels to ensure healthy fetal growth.” The researchers also found that lipids, or fat levels, in mothers’ blood do not appear to affect baby sizes, contrary to the findings of some previous studies.