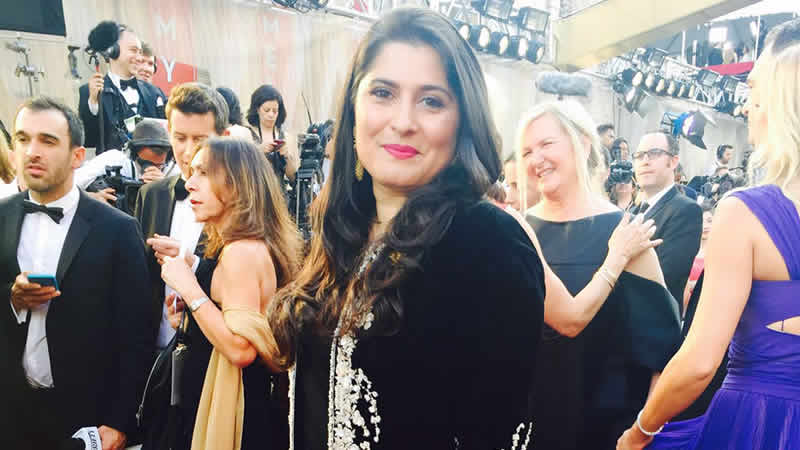 Sharmeen Obaid-Chinoy’s documentary, A Girl in the River: The Price of Forgiveness has won an Oscar award in the Best Documentary-Short subject category at the 88th Academy Awards.

Indeed Obaid-Chinoy previously won Pakistan’s first Academy Award for her documentary Saving Face at the 84th Annual Academy Awards in 2012. She is one of only eleven female directors who have ever won an Oscar for a non-fiction film and the only Pakistani to win two Academy Awards.

The category of Best Documentary (Short) was presented by Louis C.K to Sharmeen Obaid Chinoy. Upon receiving the award, Sharmeen Obaid Chinoy said: “This is what happens when determined women get together. From Saba, the girl in my film who remarkably survived honor killing and shared her story, to Sheila Nevins, Lisa Heller from HBO and Tina Brown who supported me from day one. To the men who champion women, like Geof Bartz who has edited the film to Asad Faruqi, to my friend Ziad who brought this film to the government, to all the brave men out there like my father and husband who push women to go to school and work and who want a more just society for women! Last week, our Pakistani Prime Minister [Mian Muhammad Nawaz Sharif] has said that he will change the law of honor killing after watching this film. That is the power of film!”

The 88th Academy Awards ceremony was held at the historic Dolby (Kodak) Theatre in Hollywood, California with Chris Rock as host. Sharmeen Obaid Chinoy wore a custom made outfit by Pakistan’s leading contemporary fashion house, Sana Safinaz, with jewellery exclusively designed for Sharmeen for the occasion by Kiran Aman of Kiran Fine Jewellery. The SOC Films and Home Box Office [HBO] production film, A Girl in the River: The Price of Forgiveness, is based on the practice of honor killing in Pakistan. The documentary follows the story of an eighteen-year-old woman who miraculously survived a brutal attack by her father and uncle, and with the support of a local police officer was able to have both imprisoned for their crime.

Pakistani law allows for victims of honor crimes to forgive the perpetrators. Most women never survive the attack and virtually no one has ever been sent to jail for an honor killings crime. In her case she eventually had to forgive. Inspired by her courage and the countless victims of honor crimes in Pakistan, Obaid-Chinoy launched an Anti-Honor Killing Campaign, The Price of Forgiveness [#PriceOfForgiveness] which has been successful in lobbying the Prime Minister of Pakistan to take action – he has vowed to eradicate honor killings in Pakistan. Honor killings affect hundreds of women in Pakistan every year where women are killed in the name of “honor”. Many of these murders are not documented. Honor killing is considered an offence against the individual and not the State and hence the victim can choose to ‘forgive’ the perpetrator by law.

If the victim is killed, which is often what happens in such cases, the right to forgive lies with the victim’s family – who are usually the perpetrators themselves. This law allows perpetrators to take advantage of this impunity. With this campaign, Obaid-Chinoy has mobilized civil society, key stakeholders and opinion leaders to push the Parliament to pass the Anti-Honor Killings Laws (Criminal Laws Amendment) Bill 2014. The bill will ensure that victims of honor crimes can no longer forgive’ their perpetrators, which has been exemplified by the film. Indeed following the launch of this campaign, the Prime Minister of Pakistan, Mian Muhammad Nawaz Sharif pledged his support for the campaign and to amending the law. The very objective of the aforementioned bill is to make sure honor killings are stopped immediately, by addressing the lack of attention and implementation of existing laws in an effective manner. Sharmeen Obaid-Chinoy is an Academy Award and an Emmy Award winning documentary filmmaker.

She has made various multi award winning films in over 10 countries around the world. Her films include Saving Face, Transgenders: Pakistan’s Open Secret and Pakistan’s Taliban Generation. Her work has aired on channels spanning 4 continents including, HBO, CNN, PBS, Channel 4, CBC, Arte, SBS and the Discovery channel. In 2012, Time Magazine included Sharmeen in their annual list of the 100 most influential people in the world. In 2013, the Canadian government awarded Sharmeen a Queen Elizabeth II Diamond Jubilee Medal for her work in the field of documentary films and the World Economic Forum honored her with a Crystal Award at their annual summit in Davos. She has also been awarded the Hilal-e-Imtiaz by the government of Pakistan the country’s second highest civilian honor.