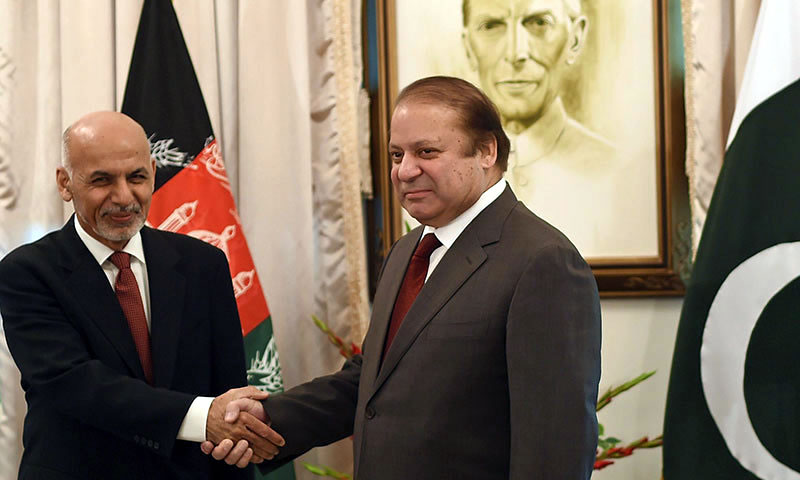 Afghan President Ashraf Ghani called Prime Minister Nawaz Sharif on Wednesday to condemn the attack on the Pakistani consulate in Jalalabad. He assured Mr Sharif that security for Pakistani diplomats posted in Afghanistan would be enhanced.

“Afghan president made a telephone call to the prime minister and apprised him regarding the attack on Pakistani consulate in Jalalabad,” Prime Minister’s Office said in a statement.

The attack incidentally happened on the day army’s Director General Operations Maj Gen Sahir Shamshad Mirza was visiting Kabul for a meeting with his Afghan counterpart on “bilateral cooperation, including border coordination, and modalities for proposed meetings of corps commanders and sector commanders”. During the conversation, Prime Minister Sharif expressed grief over the death of Afghan security personnel in the attack. Seven security personnel were killed in the attack claimed by the militant Islamic State (IS) group. Mr Sharif said: “Terrorism is a common enemy for both the countries and we will fight this menace together to eliminate it once for all.”

Meanwhile, the Foreign Office said in a statement that the Afghan government had been asked to “thoroughly investigate” the attack and share findings of the probe. Increased security was also sought for Pakistani diplomats and diplomatic staff serving in Afghanistan. Speaking at the Institute of Strategic Studies, Islamabad, Afghan Ambassador Janan Mosazai said 80 per cent of IS cadres in Afghanistan were from Pakistan. He said most of IS fighters in Afghanistan were from Bajaur, Mohmand and Orakzai tribal agencies. Mr Mosazai called for closer cooperation between the two countries for defeating the IS and other terrorist organisations. “It is required to nip this Daesh (Arabic acronym for Islamic State) menace in the bud and to make sure that the ideology of Daesh and the tactics of Daesh do not seep into the minds of impressionable youth in this region,” he said.