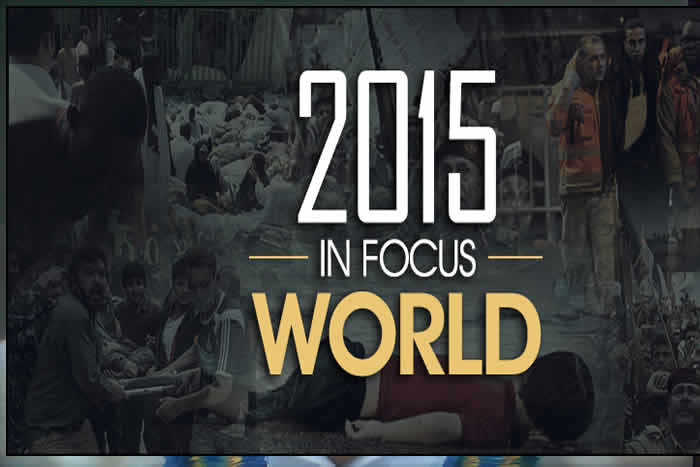 Year 2015 remained a volatile year with major terrorist attacks, natural disasters and the stories of human persistence. Following are some of the footprints of the outgoing year.

Boko Haram militants in a series of massacres from January 3–7 in Baga region of Nigeria killed more than 2,000 people, according to western media reports. The January massacre was a series of mass killings carried out by the jihadist group Boko Haram in the Nigerian town of Baga and its environs, in the state of Borno. The attack began on 3 January when Boko Haram overran a military base that was the headquarters of the Multinational Joint Task Force containing troops from Chad, Niger, and Nigeria. The militants then forced thousands of locals from the region and committed mass killings that culminated on the 7th.

Yemeni President Abd Rabbuh Mansur Hadi resigned on January 22 after rebel Houthi forces seized the presidential palace in Sana’a,  after months of unrest in A Saudi Arabia-led coalition of Arab countries started a military offensive in Yemen against the pro-Iran rebels in order to uphold the Yemeni government in its fight against the Houthis’ southern offensive. The civil war converted into a full blown conflict between the government and rebel forces, which occupied large swathes of land in the country including the port city of Aden and capital Sana’a. President Abd Rabbuh fled to Riyadh who later returned back to home with the help of Saudi Arabia led coalition forces and loyal troops in the military.

Cuba and the United States re-established full diplomatic relations, on July 20, 2015, which had been severed in 1961 during the Cold War. The revival of diplomatic ties ended a 54-year stretch of hostility between the two nations. U.S. diplomatic representation in Cuba is handled by the United States Embassy in Havana, and there is Cuban Embassy in Washington, D.C. The United States, however, continues to maintain its commercial, economic, and financial embargo of Cuba, which makes it illegal for U.S. corporations to do business with the country. President Barack Obama, has called for the ending of the embargo but the U.S. law requires congressional approval to end the embargo.

A stampede during the Hajj pilgrimage in Makkah in Saudi Arabia, left at least 2,400 people dead and over 900 injured on September 24 – with more than 650 pilgrims from various countries missing. According to recent media reports the September stampede killed at least 2,411 pilgrims. The Sept. 24 crush at Mina said to be the deadliest in the history of the annual pilgrimage. It occurred just weeks after a fatal crane collapse in Mecca. The hajj this year drew some 2 million pilgrims, though in recent years it has drawn more than 3 million without any major incidents.

Iran was most affected by the disaster, according to reports, with 464 Iranian pilgrims killed. Mali said it lost 305 people, while Nigeria lost 274, and 190 pilgrims from Egypt were killed. Others include Bangladesh with 137 pilgrims killed; Indonesia with 129; India with 120; Cameroon with 103; Pakistan with 102; Niger with 92; Senegal with 61; Ethiopia with 53; Ivory Coast with 52; Benin with 50; Algeria with 46; Chad with 43; Morocco with 42; Sudan with 30; Tanzania with 25; Burkina Faso with 22; Kenya with 12; Somalia with 10; Ghana, Tunisia and Turkey each with seven; Libya and Myanmar with six apiece; China with four; Afghanistan, Djibouti, the Gambia and Jordan with two each; and Lebanon, Malaysia, the Philippines and Sri Lanka each with one. The second deadliest incident at hajj was a 1990 stampede that killed 1,426 people. The Sept. 11 crane collapse at Mecca’s Grand Mosque, which preceded the Mina disaster, killed 111 people.

On the evening of 13 November 2015, a series of coordinated terrorist attacks occurred in Paris, the capital of France, and its northern suburb, Saint-Denis. Three suicide bombers struck near the Stade de France in Saint-Denis, followed by suicide bombings and mass shootings at cafés, restaurants, and a concert hall in Paris. The attackers killed 130 people, including 89 at the Bataclan theatre, where they took hostages before engaging in a stand-off with police. There were 368 people who were wounded,80–99 seriously so. Seven of the attackers also died, while authorities continued to search for accomplices.The attacks were the deadliest on France since World War II, and the deadliest in the European Union since the Madrid train bombings in 2004.France had been on high alert since the January 2015 attacks in Paris that killed 17 people, including civilians and police officers. The Islamic State of Iraq and the Levant (ISIL) claimed responsibility for the attacks, saying that it was in retaliation for the French airstrikes on ISIL targets in Syria and Iraq. The President of France, François Hollande, said that the attacks were an act of war by ISIL planned in Syria, organised in Belgium, and perpetrated with French complicity. In response, a state of emergency was declared, and temporary border checks were introduced.On 15 November, France launched the biggest airstrike of Opération Chammal, its contribution to the anti-ISIL bombing campaign, striking ISIL targets in Al-Raqqah. On 18 November, the suspected lead operative of the attacks, Abdelhamid Abaaoud, was killed in a police raid in Saint-Denis, along with at least two other people.

A husband and wife in a terrorist attack fatally shot 14 people and wounded 21 more in San Bernardino, California. The attack came 19 days after a series of shootings and suicide bombings in Paris that killed 130. The assault on a San Bernardino social services center by a U.S.-born Muslim man Syed Rizwan Farook and his Pakistani wife Tashfeen Malik shocked Southern California. President Barack Obama called the incident a terrorist attack. The husband and wife, who killed 14 people were radicalised before they started dating online, according to FBI Director James Comey. “We believe they [attackers] were inspired by foreign terror organisations”. The FBI probe has determined that Syed Farook and Tashfeen Malik were inspired by foreign armed groups and discussed “jihad and martyrdom” as early as 2013, Comey said while testifying at a hearing of the Senate Judiciary Committee. The incident caused Islamophobia across the United States resulting scores of attacks on Muslims and their worship places.

Iran and five permanent members of United Nations Security Council i.e. US, UK, Russia, France, China plus Germany reached to a nuclear deal on April 2nd this year. Negotiations for a framework deal over the nuclear program of Iran took place between the foreign ministers of the countries at a series of meetings held from 26 March to 2 April 2015 in Lausanne, Switzerland. On 2 April the talks came to a conclusion and a press conference was held by Federica Mogherini (High Representative of the European Union for Foreign Affairs) and Mohammad Javad Zarif (Minister of Foreign Affairs of Iran) to announce that the eight nations had reached an agreement on a framework deal.

The European migrant crisis or European refugee crisis began in 2015, when a rising number of refugees and migrants began to make the journey to the European Union to seek asylum, travelling across the Mediterranean Sea, or through Southeast Europe. They come from Syria, Iraq, Eritrea, Nigeria, Somalia, Sudan, the Gambia, Afghanistan, Pakistan, Bangladesh), and Serbia, Kosovo and Albania. According to the United Nations High Commissioner for Refugees, as of December 2015, the top three nationalities of the almost one million Mediterranean Sea arrivals since the beginning of the year are Syrian (50%), Afghan (20%) and Iraqi (7%). The phrases of “European migrant crisis” and “European refugee crisis” widely used in April 2015, when five boats carrying almost 2,000 migrants to Europe sank in the Mediterranean Sea, with a combined death toll estimated at more than 1,200 people. The full horror of the human tragedy unfolding on the shores of Europe was brought home as images of the lifeless body of a young boy – one of at least 12 Syrians who drowned attempting to reach the Greek island of Kos – encapsulated the extraordinary risks refugees are taking to reach the west. The picture depicted the dark-haired toddler, wearing a bright-red T-shirt and shorts, washed up on a beach, lying face down in the surf not far from Turkey’s fashionable resort town of Bodrum. Turkish media identified the boy as three-year-old Aylan Kurdi and reported that his five-year-old brother had also met a similar death. Both had reportedly hailed from the northern Syrian town ok obani, the site of fierce fighting between Islamic state insurgents and Kurdish forces earlier this year.

At the Paris climate conference in December 2015, 195 countries adopted the first-ever universal, legally binding global climate deal. The agreement sets out a global action plan to put the world on track to avoid dangerous climate change by limiting global warming to well below 2 degree C. The agreement is due to enter into force in 2020. Cheering envoys from 195 nations approved a historic accord in Paris to stop global warming, offering hope that humanity can avert catastrophic climate change and usher in an energy revolution. French Foreign Minister Laurent Fabius ended nearly a fortnight of gruelling UN negotiations on the outskirts of Paris with the bang of a gavel, marking consensus among the ministers, who stood for several minutes to clap and shout their joy, with some shedding tears of relief. The post-2020 Paris Agreement ends decades-long rows between rich and poor nations over how to carry out what will be a multi-trillion-dollar campaign to cap global warming and cope with the impact of a shifting climate. With 2015 forecast to be the hottest year on record, world leaders and scientists had said the accord was vital for capping rising temperatures and averting the most calamitous effects of climate change. Without urgent action, they warned, mankind faced increasingly severe droughts, floods and storms, and rising seas that would engulf islands and coastal areas populated by hundreds of millions of people.