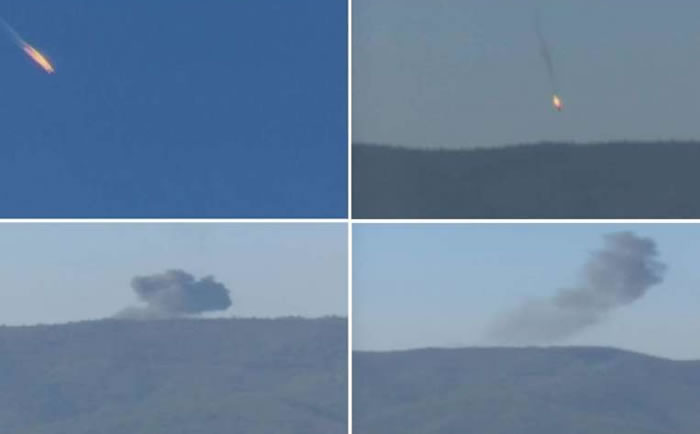 Russia confirmed on Tuesday that a warplane shot down by Turkey on the Syrian border was one of its fighter jets but insisted the plane had not violated Turkish airspace.

The ministry said the fate of the Sukhoi aircraft’s two pilots was not yet clear but that preliminary reports suggested they had ejected. “Presumably as a result of firing, an Su-24 plane of the Russian forces crashed in the Syrian Arab Republic,” the defence ministry said in a statement.

“The plane was at an altitude of 6,000 metres. The fate of the pilots is being determined,” the statement said. “Throughout its flight the plane remained exclusively over Syrian territory.” The incident is the first time a Russian military plane has been downed since Moscow began a bombing campaign on September 30 at the request of its long-standing ally Syrian President Bashar al-Assad. Moscow’s intervention in Syria has strained its relations with Turkey — a fierce opponent of Assad — with Ankara summoning Russia’s ambassador last week after Moscow’s warplanes bombed Syrian territory “very close” to the Turkish border.

One Russian pilot of a warplane downed by Turkey over Syria on Tuesday was killed by rebels and the second is missing after they both parachuted, rebel and opposition sources said. A Russian helicopter was also hit and damaged by rebel fire in the same area of northern Syria, a monitoring group said, but it was able to land in government-held territory. The sources told AFP that the first pilot was killed by opposition forces who shot at him as he landed after ejecting from the plane. Several videos circulating online and shared on opposition social media sites purported to show the dead pilot surrounded by rebels from different factions.

Fadi Ahmed, a spokesman for the First Coastal Front rebel group, said “the Russian pilot was killed by gunfire as he fell with his parachute” in the Jabal Turkman area of Latakia province on the coast. “The 10th Brigade (rebel group) transferred the body of the dead Russian to the local rebel joint operations room,” added Omar Jablawi, a media activist working with rebels in the area. He declined to specify exactly where the joint operations room was located. The sources said rebels were still searching for the second Russian pilot of the Su-24 aircraft, which Ankara said was downed by Turkish forces after violating its territory.