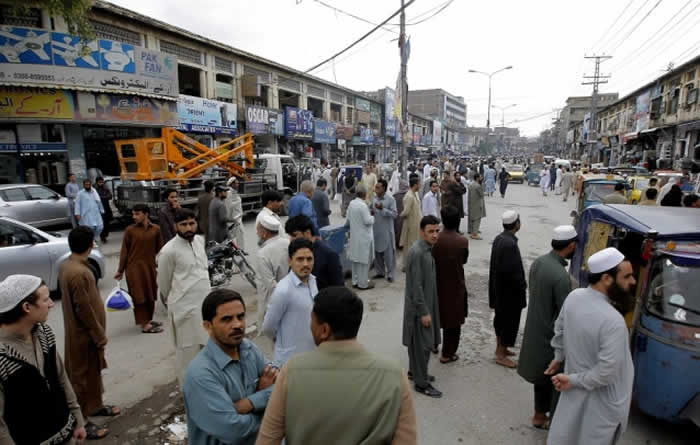 In Pakistan, at least 228 people are confirmed dead in the aftermath of a massive 7.5 magnitude earthquake which hit northern Afghanistan and Pakistan on Monday.

Rescuers on Tuesday rushed to deliver relief aid to victims of the quake, which killed at least 275 people in the Pak-Afghan region over a wide swathe of mountainous terrain.

The initial quake — which struck the country at 2:09pm Monday — was followed by seven aftershocks, measuring as high as magnitude 4.8, according to the United States Geological Survey (USGS). The latest aftershock came just before dawn on Tuesday. Thousands spent the night outdoors in near-freezing temperatures reluctant to go back inside for fear of aftershocks, Pakistani media reported. “Rescue work is ongoing, and tents, blankets and sleeping mats are being provided,” Latifur Rehman, a Pakistani disaster management official, told Reuters from Peshawar.

Pakistan’s military and civilian authorities dispatched several helicopters to affected areas to assess damage and run rescue operations, the National Disaster Management Authority said. The toll was expected to rise as search teams reach remote areas that were cut off by the powerful 7.5 magnitude quake, which triggered landslides and stampedes as it toppled buildings and severed communication lines. Prime Minister Nawaz Sharif, in London en route from an official visit to the US, said he would personally oversee the rescue efforts.

“We will try our best to deal with this disaster using our own resources,” he said. Landslides in Pakistan’s northern areas over the weekend caused by heavy rain and snow had already left thousands of tourists stranded. The earthquake struck almost exactly six months after Nepal suffered its worst quake on record on April 25. Including the toll from a major aftershock in May, 9,000 people lost their lives there and 900,000 homes were damaged or destroyed. In Afghanistan, where rescue and relief work is likely to be complicated by security threats created by an escalating Afghan Taliban insurgency, more than 50 people were reported dead in several provinces including Badakhshan, where hundreds were killed in mudslides last year.

Hundreds of houses were destroyed, creating additional hardship with winter temperatures setting in. The death toll could climb in coming days because communications were down in much of the rugged Hindu Kush mountain range where the quake was centred. The US and Iran were among countries that offered to provide humanitarian assistance to Afghanistan, which already depends heavily on foreign aid after decades of war that have wrecked its economy and infrastructure.

10 Pakistani Actress Plastic Surgery Before And After