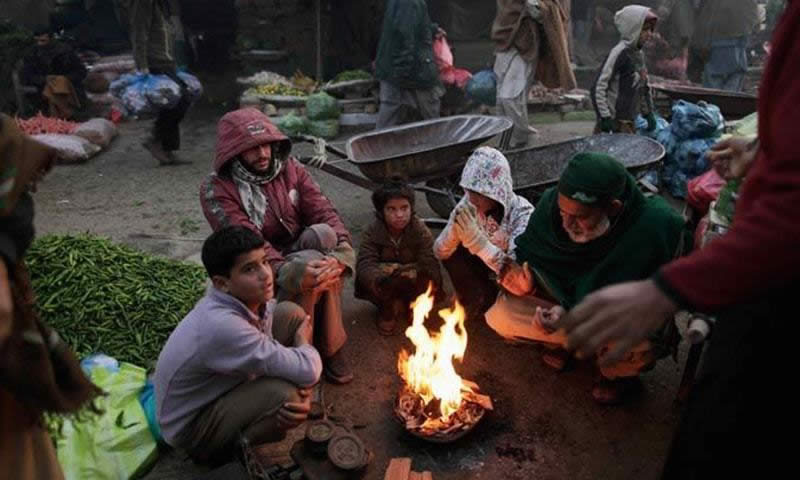 A big chill sweeps across the country

Pakis­tan witnessed some of the heaviest pre-winter rains in recent memory over the weekend, leading to a marked drop in temperature in various areas across the country. On Sunday morning, heavy precipitation — including rain and snow — also triggered landslides in the northern parts of the country.

“This is the heaviest pre-winter rainfall in Pakistan’s history and has affected more than 80 per cent of country,” said Dr Muhammad Hanif, spokesperson for the Pakistan Meteorological Department (PMD).

“This signifies that winter, which could be harsher and more prolonged this year, has arrived.”  Hilly areas in the country’s north saw heavy snowfall, with an average of two feet of snow falling in Naran, which went up to around four feet in some areas. The twin cities of Rawalpindi and Islamabad received the highest amount of rainfall in the country, 81mm and 135mm, respectively, with Saidpur receiving 137mm, Zero Point 127, Golra 107, Bokra 94, Shamsabad 131and Chaklala 102mm.  This brought the maximum temperature in the capital down from 28 degrees on Saturday to a chilly 16 degrees Celsius on Sunday. Lahore also received light rain in the early hours of Sunday, introducing a chill in the air and forcing people to wear warm clothes.

The maximum temperature in the city was 24 degrees and 19 degrees Celsius was the minimum on Sunday night. The Met Office predicts that it will continue to snow in parts of Azad Kashmir, the Galiyat, Malakand and Gilgit-Baltistan on Monday. Daytime temperatures in Murree dropped to eight degrees Celsius, while Muzaffarabad went down to 11 degrees, with increased chances of snowfall on hilltops. The PMD spokesperson said that extreme weather conditions are visible across the Northern Hemisphere and this unexpected spell of heavy precipitation could be part of that cycle. The rainfall between Oct 15 and Oct 31 is categorised as pre-winter rains in South Asia, but this is usually low volume precipitation and limited to certain areas. However, this current spell of rainy weather has engulfed most parts of the country.