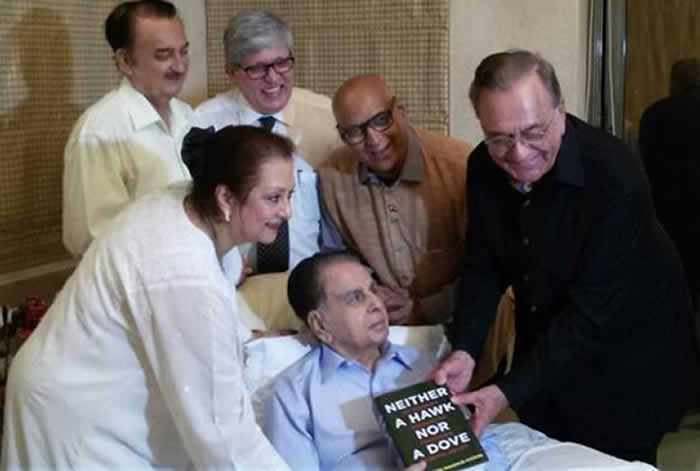 A day after he stood his ground against rabid anti-Pakistan protesters in Mumbai, former foreign minister Khurshid Mahmud Kasuri visited Dilip Kumar on Tuesday, saying the ageing movie idol, also a frequent target of Shiv Sena violence, was an apostle of peace between the two countries.

The actor had visited Pakistan twice on secret missions for the Indian government, he said.

“After Monday’s violent protests against my visit, I thought I should spend some time with our great apostles of peace,” he told this correspondent on phone. “I met followers of Mahatma Gandhi at his Mani Bhavan former home. Gandhi’s indefinite fast to get Pakistan its monetary dues from India is not known in Pakistan. Then I visited the Jinnah House, and it broke my heart to see it in disuse and disrepair when it could have easily become Pakistan’s consulate in Mumbai.”

The Quaid too was only known as a negative character in India. “His secular credentials enshrined in his address to the new nation are hardly known here.” His meeting with Dilip Kumar was the highpoint of his last day in Mumbai. “His wife Saira Banu told me that Dilip Saahab had been twice on secret missions to Pakis­tan. He was flown to Islama­bad by the Indian government in special aircraft. I believe one of the visits took place during the Zia ul Haq period.

The other was more recent.”  Following the Kargil war in 1999, then Indian Prime Minister Atal Behari Vajpayee had apparently called up Prime Minister Nawaz Sharif to express regret that while he (Vajpayee) had been received in the Lahore with such warmth, Pakistan had wasted no time in trying to occupy Kargil. This is stated in Mr Kasuri’s book ‘Neither a Hawk nor a Dove: An Insider’s Account of Pakistan’s Foreign Policy’. The book then goes on to say that Vajpayee told Sharif that he would like him to talk to someone sitting next to him.

“Sharif was astonished to hear the voice of Dilip Kumar (earlier Yusuf Khan), who was originally from Peshawar tell him: ‘Mian Sahib, we did not expect this from you since you have always claimed to be a great supporter of peace between Pakistan and India. Let me tell you as an Indian Muslim, that in case of tension between Pakistan and India, the position of Indian Muslims becomes very insecure and they find it difficult to even leave their homes. Please do something to control this situation.” the book said.

US Airdrops Ammunition to Syria Rebels