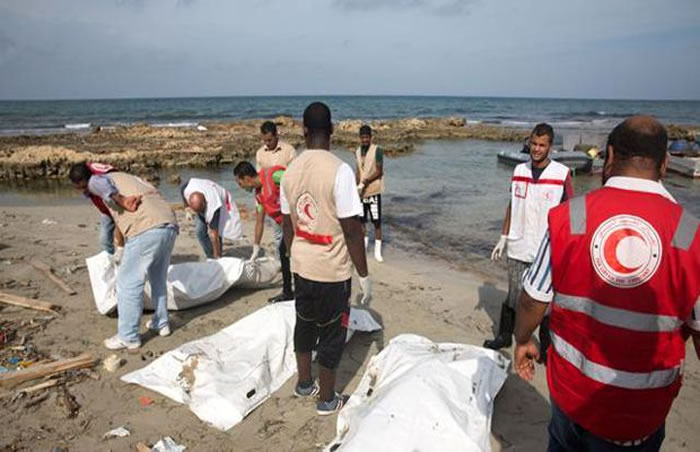 Bodies of 95 Migrants Found Washed Up in Libya: Red Crescent

The bodies of 85 migrants have been found washed up on the coast of Libya, a major departure point for the sea crossing to Europe, the Red Crescent said Monday.

Since Tuesday, volunteers have recovered dozens of bodies of migrants in an advanced stage of decomposition on beaches near the capital, spokesman Mohamed al-Misrati said.

They found 75 bodies around Tripoli and another 10 in Sabratah, 70 kilometres (43 miles) to the west, he said. The Libyan coastguard said it had also rescued 212 migrants from two overloaded rubber dinghies off the Libyan coast. “We were informed of the presence of two large zodiacs off the coast of Garabulli” 60 kilometres east of Tripoli, a coastguard officer told AFP. He said that 22 women were among the rescued migrants, who were of different nationalities including many Senegalese and Sudanese. Libya, with a coastline of 1,770 kilometres, has for years been a stepping stone for Africans bound for Europe.

Most head for Italy’s Lampedusa island which is 300 kilometres from Libya. People smugglers have taken advantage of chaos in Libya since the 2011 uprising that toppled and killed veteran dictator Moamer Kadhafi to step up their lucrative business. In exchange for steep fees, they take would-be migrants on board rickety boats for the treacherous crossing. About 515,000 migrants have crossed the Mediterranean this year alone, with up to 3,000 people dead or reported missing in that period, according to the UN High Commission for Refugees.

Google in Talks to Invest in Chat Company Symphony