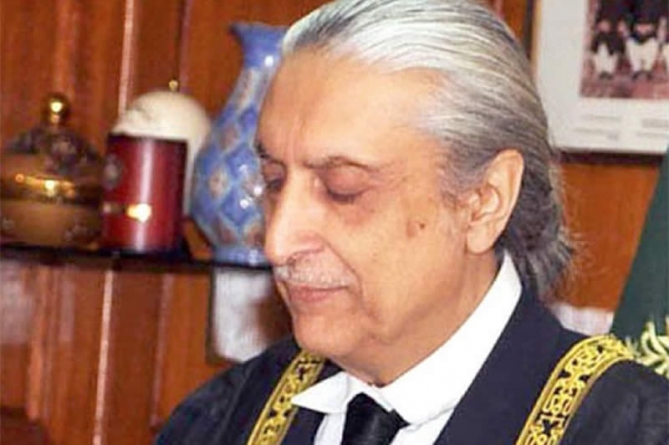 President Mamnoon Hussain swore Justice Khawaja as the new chief justice in an oath taking ceremony held at the Presidency.

The ceremony was also attended by the Prime Minister Nawaz Sharif, federal ministers, members of parliament, chiefs of armed forces, lawyers and Supreme Court judges. It is pertinent to mention that Justice Khawaja will serve as chief justice for only 23 days as he is also due to retire on Sept 9. Upon retirement of Justice Khawaja, Justice Anwar Zaheer Jamali will be senior most judge of the Supreme Court. Justice Jawwad Khawaja was born on September 10, 1950 in Wazirabad and obtained a degree in law from Punjab University. He started his career as an advocate of high court in 1975 and got practicing license of Supreme Court in 1985. He has also served as a visiting lecturer at the Punjab University Law College from 1975 to 1986.

Justice Khawaja also received an LLM from University of Berkeley, California and taught at Lahore University of Management Sciences (Lums) until he was appointed as the Judge of Supreme Court in 2009. It is pertinent to mention here that Justice Khawaja was the first judge to resign in protest from the high court in March 2007 after former President Pervez Musharraf virtually suspended the then chief justice of Pakistan, Chaudhry Iftikhar, and appointed the available senior-most judge, Justice Javed Iqbal, as the acting Chief Justice of the Supreme Court. His resignation at the time was hailed by bars and jurists in the country. Senior lawyer Muhammad Lateef Khan Khosa had termed the resignation a first drop of rain, which he said would help the lawyers’ movement against Musharraf.