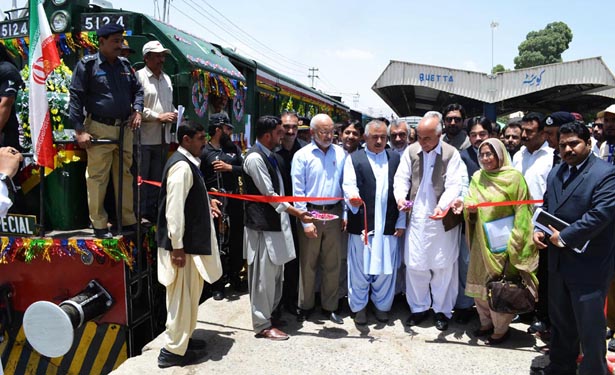 After a gap of about five years the freight train service between Pakistan and Iran has been relaunched.

Balochistan Chief Minister Dr Abdul Malik Baloch inaugurated the Quetta-Zahedan goods transportation service here on Tuesday. The train has 24 bogies which will eventually be increased to 40.

Carrying cement and some other goods, the first train left the Quetta Railway Station for Zahedan and would return to the city on June 13, said a senior official of Pakistan Railways (PR). The decision to restore the freight service had been taken at a meeting in Tehran between railways officials of Pakistan and Iran on May 18. The service was suspended because of security concerns after the Quetta-Taftan track was blown up several times.

The continuous decline of railways system in Pakistan was another reason for discontinuing the service. Minister for Railways Khwaja Saad Rafeeq said on Monday that besides the Pakistan-Iran goods train service, the Quetta-Zhob train service would be restored and its route would be extended to Peshawar. Chief Minister Malik Baloch said at the inauguration ceremony that the freight service would boost trade between Pakistan and Iran and be of benefit to traders of both countries. “It is one of the signs of improvement in security situation in the province,” he added.

The chief minister praised Saad Rafique’s efforts to put the PR back on track. He said the minister had worked hard to improve the railways system. He called for restoring the Sibi-Harnai train service because people were facing hardships because of the suspension of the service. He also called for improving the speed of train on the Quetta-Taftan railway route from the present 40km to 120km per hour. PR Chairperson Parveen Agha said that the restoration of freight service would increase the volume of trade with Iran. She said the PR was planning to run more trains on the Quetta-Taftan route.