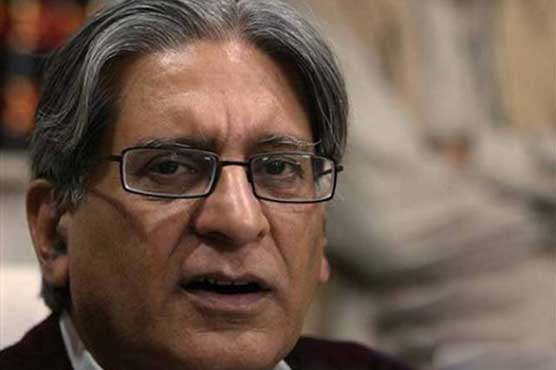 Leader of the Opposition in Senate Chaudhry Aitzaz Ahsan on Tuesday strongly criticised the federal budget for 2015-16 and termed it anti-poor and pro-rich.

Opening debate on the budget in the Senate, he said no incentives had been offered to the poor while the rich and mighty had been rewarded in budgetary proposals. He said the increase in taxes on food items would badly affect the poor.

He said 61 per cent indirect taxes should be brought down gradually to benefit the poor and resource-less. Demanding further increase in the salary of government employees, he said Rs13,000 maximum wage was a joke with labours. The salary of polio workers should be enhanced by four times. He expressed concern over what he called unequal allocations in Public Sector Development Programme (PSDP). Construction industry has been offered incentives by ignoring the poor segment of the society. He criticised the exemption offered in the budget to the operators of LNG terminals. Only 20pc customs duty would benefit the rich. Mr Ahsan also criticised the re-emergence of circular debt in the power sector. Appreciating the imposition of super tax on people having per annum income of over Rs500 million, he said the lower limit of per annum income of the tax should have been decreased. He said the government had badly failed in taking benefit of decrease in oil price.

He strongly criticised the performance of Federal Board of Revenue (FBR), saying that the active tax payers list has decreased from 835,220 in 2013 to 725,107 in 2014.  Minister for Climate Change Mushahidullah Khan informed the house that the production of Pakistan Steel Mills (PSM) would be increased to 70pc of its total production capacity within two months. “When the PML-N came into power in 2013 the production of PSM was only three per cent but within two years we have managed to take this production to 60 per cent”, he said. Similarly, he added, Pakistan International Airlines (PIA) had only 16 operational aircraft in 2013 while at present it has 28 aircraft and by the end of this year this number would cross 40. The minister said the opposition was misleading the people of Gilgit-Baltistan by spreading the rumours of the withdrawal of wheat subsidy. He clarified that the government had announced a subsidy of Rs6.045 billion on wheat in GB for the fiscal year 2015-16.

He criticised the previous PPP government and said that the country came under heavy debt due to its bad governance. The minister rejected the notion that the budget 2015-16 was anti-poor, saying that the government had initiated a number of schemes for the poor and middle class people. Meanwhile, senators of opposition parties staged a token walkout from the house register their protest against what they called less allocation of funds in the budget for the western routes of China-Pakistan Economic Corridor (CPEC). Senator Ilyas Bilour of Awami National Party announced the token walkout. The Senate extended the time for the presentation of a report by the Committee on Interior and Narcotics Control on “The Islamabad Capital Territory Local Government Bill, 2015” till June 26. The motion in this regard was moved by committee chairman Rehman Malik. “The government should give priority to fulfilling the basic necessities of life of the poor who cannot afford to avail expensive services, especially health and education,” said Tahir Hussain Mashhadi of Muttahida Qaumi Movement (MQM).

Senator Nauman Wazeer of Pakistan Tehreek-i-Insaf said that the government should prepare budget keeping in view the requirements of the next 50 years. He praised the government for its efforts in overcoming the energy crisis. Senator Muzaffar Hussain Shah presented some suggestions to facilitate the agriculture sector, including withdrawal of General Sales Tax (GSP) on fertilizers, pesticides and herbicides. Senator Jamal Dini said new energy projects should be initiated in Gwadar in order to reduce its dependency on Iranian electricity. Senator retired General Abdul Qayum said that the present government had managed to stabilise the country’s economy through its prudent policies. Senator Khusbakht Shujaat of MQM said the government should allocate at least one per cent of the budget for Karachi as it was facing a number of issues.