PTI Takes Back Three Of its 14 Witnesses 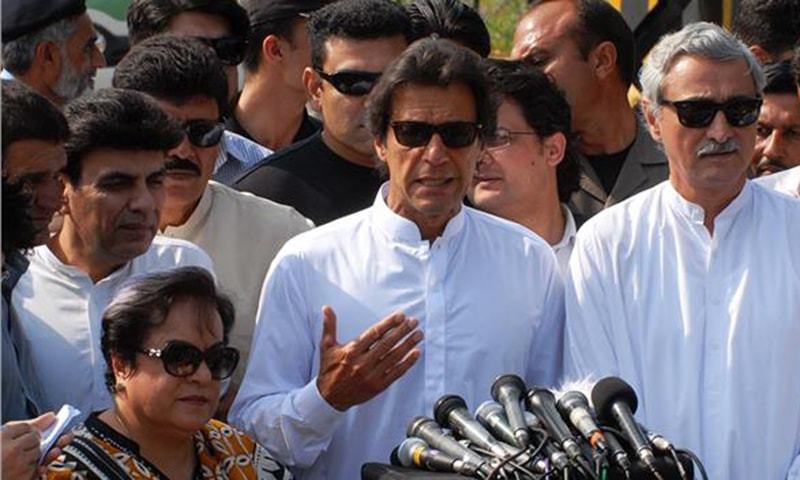 The Pakistan Tehreek-i-Insaf, which is trying to convince a three-judge poll inquiry commission that the 2013 general elections were massively rigged in a systematic manner, withdrew on Monday three of the 14 witnesses from the list it had submitted.

Former MQM legislator Nabeel Gabol is among the three witnesses.

PTI counsel Abdul Hafeez Pirzada told the Judicial Commission that he would cross-examine National Database and Registration Authority (Nadra) Chairman Usman Mobeen on Thursday and Mudassir Rizvi, the programme head of the Free and Fair Election Network, on Friday. On Monday, three witnesses were called to testify, but only one of them – Pakistan Security Printing Corporation’s (PSPC) Managing Director Rizwan Ahmed – was cross-examined by the commission.

The other two – Sindh’s former election commissioner S.M. Tariq Qadri and Printing Corporation of Pakistan’s (PCP) Karachi manager Muzaffar Ali Chandio — were withdrawn when Mr Pirzada told the commission that he was satisfied with the cross-examination of Rizwan Ahmed, though he said the PTI was considering to summon Election Commission’s (ECP) Secretary Babar Yaqoob because he was chief secretary of Balochistan when the elections were held. Anchor person Hamid Mir would also be produced as a witness and cross-examined, Mr Pirzada said, adding that he might file an application to summon Mohammad Naeem Akhtar who headed a team investigating the outsourcing of printing of ballot papers to the Pakistan Post Foundation by the PCP.

Rizwan Ahmed, who joined as the PSPC as Managing Director on April 11, 2013, told the commission that initially the corporation was required to print 68 million ballot papers, but the figures were corrected when judgments of different courts started pouring in. Eventually, he added, the corporation had to print 73.3m papers on the ECP directives and go for eight re-prints because of courts’ orders. But, he said, he had no idea when the additional ballots had been printed since it was in the thick of things, but definitely before May 9 when the entire ballot papers were handed over. He said the additional papers for which reprints had to be made were later destroyed though he was not personally present at the time of the destruction.

The PSPC procedure suggested that ballot papers had to be destroyed in the presence of security agencies. Asked whether the PSPC had the capacity to print all ballot papers, Mr Ahmed said that in view of the heavy load the corporation had to employ new machines from the open market, though within the PSPC premises. He denied that high-spec photo copies had also been procured for printing the ballots and said that all the printing machines were not equipped with the electronic memory.