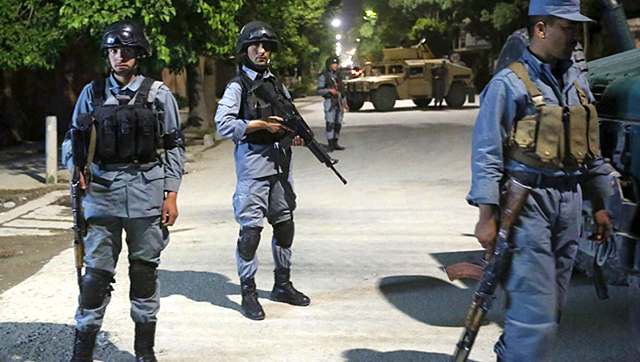 Two Indians and an American were among five people killed when gunmen stormed a downtown Kabul guesthouse, trapping dozens of people attending a concert and triggering an hours-long standoff with Afghan security forces, officials said Thursday.

The Taliban claimed responsibility for the overnight siege on the Park Palace, which was about to host a concert by a well-known Afghan singer.

The attack was planned carefully to target the party in which important people and Americans were attending,” the militants said in a statement.  The assault, which lasted around seven hours and triggered explosions and sporadic bursts of gunfire, comes as Afghan forces face their first fighting season against the insurgents without the full support of US-led foreign combat troops. “Five people were killed including foreigners and Afghans in the attack on Park Palace guesthouse,” Kabul police chief Abdul Rahman Rahimi told reporters, adding that at least five others were wounded.

“Fifty-four people were rescued by security forces,” he added after a large number of armed personnel swooped on the guesthouse, which is in an up-market district and popular with international aid agency workers. Rahimi did not give a breakdown of the nationalities of those killed but the US embassy confirmed one American fatality. “Our thoughts are with the families of the victims at this time. Out of respect for the families of those killed, we have no further information at this time,” US embassy spokeswoman Monica Cummings told AFP.

Two Indians were also killed, while another was missing, an Indian foreign ministry official said in New Delhi. “According to the information we have here, two Indians are dead, one is unaccounted for and three others are safe,” the official said on condition of anonymity. Indian Prime Minister Narendra Modi said earlier in a tweet that he was “concerned about the situation & I pray for everyone’s safety.”

Kabul deputy police chief Sayed Gul Agha Rohani said the siege ended when Afghan security forces killed three assailants, but Rahimi gave a conflicting number of attackers. “So far we have identified one attacker, but we are looking to see if there were more. We are trying to find out the circumstances in which the attack took place. We need more investigation,” Rahimi said.