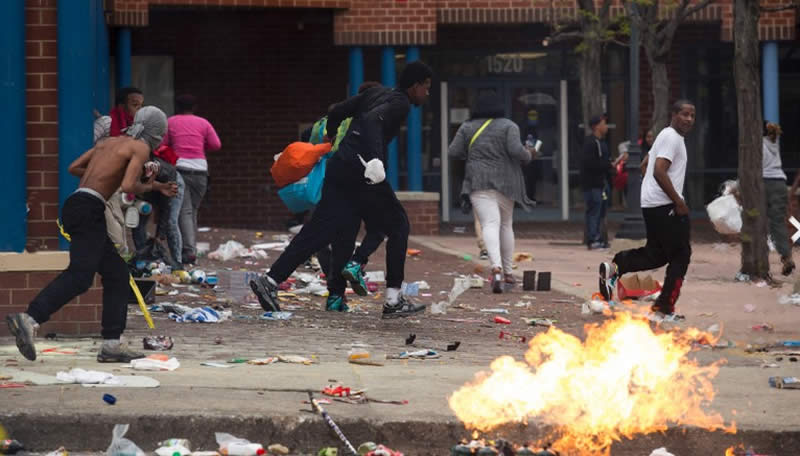 Reporters saw looters breaking in through the roof of a Baltimore liquor store. They were tossing bottles and cans of alcohol onto the street below.

Six Baltimore police officers have been seriously injured in Monday’s violence, Police Commissioner Anthony Batts said. He said many of the instigators appeared to be high school students.

“I think they thought it was cute to throw cinder blocks at police,” Batts said. Meanwhile, several street fires and car fires continued burning late into the night as sirens blared nonstop in the city. Several of the Baltimore police officers injured Monday were hit with rocks, sticks and bottles from “what appear to be high school students,” Police Commissioner Anthony Batts said. Baltimore Mayor Stephanie Rawlings-Blake said it’s not clear whether an enormous fire at a senior center under construction was related to riots Monday night.

She said the cause of the fire is under investigation. The family of Freddie Gray condemned the violence that spread across Baltimore after his funeral on Monday. “I want y’all to get justice for my son, but don’t do it like this here,” his mother told journalists. Gray’s twin sister, Fredericka, also denounced the riots. “I don’t think that’s for Freddie,” she said. “I think the violence is wrong.” Chaos and violence erupted on the streets of Baltimore late Monday as protesters clashed with police, several of whom were injured.

Maryland Gov. Larry Hogan declared a state of emergency and activated the National Guard. The mayor of Baltimore said every possible resource was being deployed to “gain control of this situation.” “What we see tonight that is going on in our city is very disturbing,” Mayor Stephanie Rawlings-Blake told reporters. “Too many people have spent generations building up this city for it to be destroyed by thugs who — in a very senseless way — are trying to tear down what so many have fought for.”