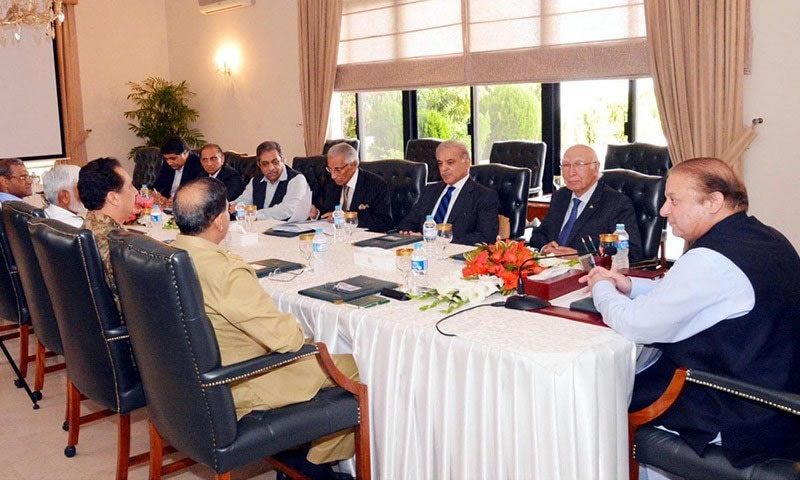 The government said on Thursday it had assured Saudi Arabia of its support in enforcing the United Nations Security Council’s arms embargo on Houthi militia and forces loyal to former Yemeni president Ali Abdullah Saleh, which could entail a role for the Pakistan Navy.

The commitment was conveyed to the Saudi leadership by Punjab Chief Minister Shahbaz Sharif who visited the kingdom on Wednesday as special envoy of the prime minister, along with Adviser on Foreign Affairs and National Security Sartaj Aziz.

Chief of General Staff Lt Gen Ashfaq Nadeem and Foreign Secretary Aizaz Chaudhry. Briefing a specially convened meeting at the Prime Minister’s House on the trip, the delegation members said: “They affirmed to the Saudi leadership that the government of Pakistan would fully participate and contribute to the implementation of the UNSC resolution.” A statement issued by the Prime Minister’s Office did not explain how Pakistan planned to help Saudi Arabia in enforcing the arms embargo.

Speaking to Dawn on the background, a key government figure said a separate announcement would be made by the government about committing its naval vessels for the purpose.“We are looking at how many ships can be spared,” he said, adding that two Pakistan Navy vessels were already in the region conducting anti-piracy operations as part of the Combined Task Force 151.

Earlier in the day, Prime Minister Nawaz Sharif held a separate meeting with Chief of Naval Staff Admiral Mohammad Zakaullah for discussing the modalities of participating in the force which would monitor and enforce the UN-mandated arms embargo. The government has moved in a ‘gradual manner’ to involve itself in Yemen, the government functionary said, adding that it was “done to sustain the positive narrative”.

The government said its decision to contribute to enforcement of the embargo was “pursuant to paragraphs 10 and 11 of parliament’s resolution of 10th April”. The paragraphs had called for supporting Saudi Arabia in case of violation of its territorial integrity and threat to two Holy Mosques and expanding cooperation with Gulf Cooperation Council and other regional countries against extremism and terrorism, which are said to be threatening security and stability of the region.