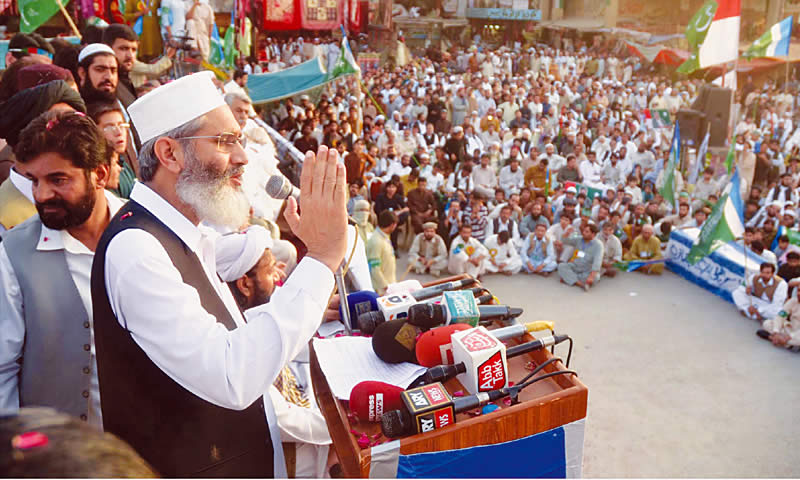 Jamaat-i-Islami (JI) chief Siraj-ul-Haq has pledged to raise the issues of Karachiites in the Senate, adding that those who aim to divide Sindh and Balochistan on the lines of language are not the friends of the nation.

The JI chief was addressing an ‘awami jirga’ organised by the party’s Karachi chapter on Wednesday at Machhar Colony near Sohrab Goth, where residents shared their grievances with party officials.

Referring to the conspiracies being hatched to destabilise the country by igniting violence and terrorism on the basis of language, sect and religion, the JI chief said: “The government which is not able to provide security to the people has no right to rule the country.” In Karachi, he said, the media and business community, and even the judiciary are being held hostage and pledged that the JI, along with the support of the people, aims to get rid of these terrorists.

He also demanded the federal and provincial governments to stop violence against the oppressed people belonging to tribal areas and warned that if the down-trodden people of Karachi are not treated equally, then they, including the residents of Machar Colony, would stage a protest outside the Chief Minister House. A large number of local residents including men, children and the elderly participated in the jirga.

Speaking at the gathering, JI Karachi chief Hafiz Naeem added that recruitment at the police department was on the basis of political affiliation. He condemned the extrajudicial killings of the Pakhtuns by the police and Rangers and said that the JI stands to redress the grievances of the people. Amir of the Balochistan JI Abdul Mateen Akhunzada said that terrorists belonging to any party should be arrested and brought to the court of law.