PML-N Makes the Best of a Bad Bargain 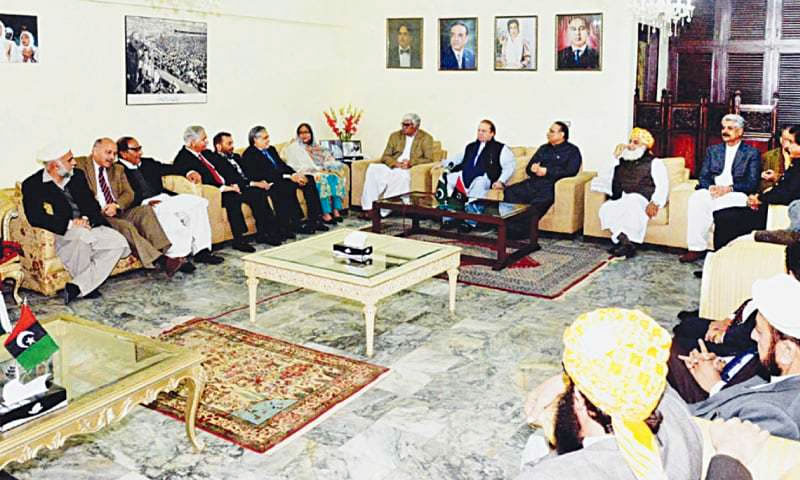 Political reconciliation appeared to be the order of the day in the federal capital, on Tuesday. Over a lunch meeting with the heads of major political parties,

Later in the evening, PPP Co-chairperson Asif Zardari hosted the PM at his residence for a quick meeting where he formally announced his support for Mr Rabbani’s candidature. But given the prime minister’s stiff face and given the lack of his usual wit, one of the participants of a meeting held at the Prime Minister’s Office early on Tuesday afternoon told Dawn that it was evident that the PML-N chief had made the announcement with a heavy heart. Until last night, the ruling party continued efforts to muster support for the election to the two top positions in the Senate, which included a rare phone call between Punjab Chief Minister Shahbaz Sharif and MQM chief Altaf Hussain. However, after Monday night’s show of power by the PPP and its allies, PML-N was put on the back foot.

The two key factors which, according to one of the PM’s close aides, figured in the decision to support the PPP candidate for Senate chairmanship were the PTI and future legislation. Another ruling party source, privy to in-house brainstorming, said that with the unpredictable PTI chief Imran Khan – who went as far as declaring 2015 as an election year on Tuesday – waiting in the wings, “the PML-N couldn’t afford a fractured parliament”. The argument was also impressed upon the prime minister by JUI-F chief Maulana Fazlur Rehman and ANP leader Asfandyar Wali Khan, who called on him separately in the day.