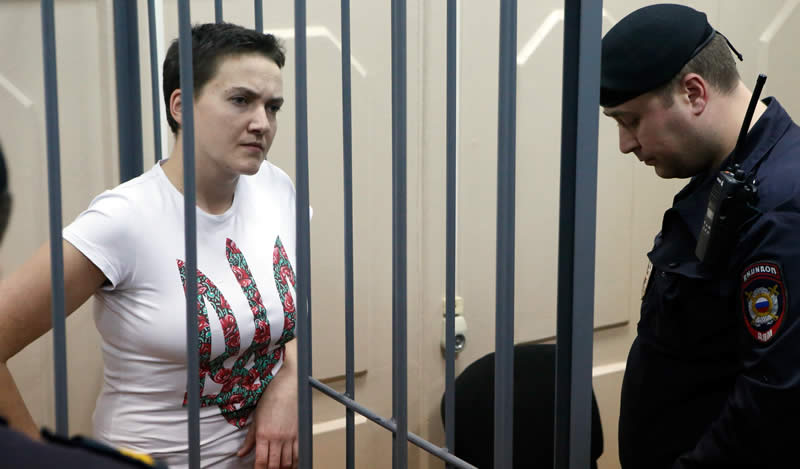 Renowned Russian writer Vladimir Voinovich on Thursday warned President Vladimir Putin not to let die a Ukrainian military pilot who has been on hunger strike in a Moscow jail for over two months.

Nadia Savchenko, a 33-year-old Ukrainian helicopter navigator, is being held in a Moscow prison hospital after launching a hunger strike on December 13.

Russia accuses her of taking part in the killing of two Russian journalists in east Ukraine who died in shelling at a rebel checkpoint. Voinovich, 82, a novelist who spent a decade exiled by the Soviet authorities, condemned the charges against Savchenko as “nonsense” and told Putin that “she should simply be freed.” “Please don’t disgrace yourself and Russia yet again and don’t let this courageous woman perish,” Voinovich wrote in an open letter to Putin published on the Open Russia website, a rights forum.

“The attitude to you outside our country is already far from enviable but if Savchenko dies, it would be better for you not to appear in Western capitals.” Savchenko’s lawyers have said she risks death after losing more than 20 kilos (44 pounds, 3 stone), and she appeared pale and gaunt at a recent court appearance. “We predict the worst possible outcome,” her lawyer Mark Feigin told journalists on Wednesday after a Moscow court threw out an appeal for her release.

In Ukraine, she is feted as a symbol of resistance and has been elected an MP in absentia. Rights groups including Amnesty International have called for her release, saying she was abducted from Ukraine, where she had been held prisoner by separatist rebels. Russia says she voluntarily crossed the border. Voinovich is best known for his series of satirical novels about a hapless Soviet soldier called Ivan Chonkin. He was expelled from the Soviet Union in 1980, only returning in 1990.

Putin gave Voinovich a state prize shortly after becoming president in 2000 and has also sent him congratulatory telegrams on his birthdays. Putin has faced criticism over Russia’s actions in Ukraine from a number of widely respected figures in the arts, including film director Alexander Sokurov and rock singer Andrei Makarevich. However more than 100 celebrities, including conductor Valery Gergiev, last year signed an open letter to Putin praising his policies on Ukraine and Crimea. -AFP