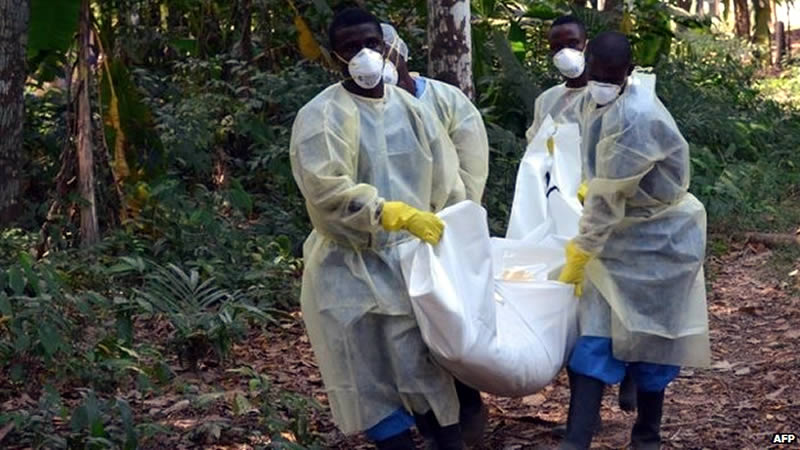 The number of new Ebola cases in west Africa rose for the second week running after a previous fall, including a “sharp increase” in Guinea, the World Health Organization said Wednesday.

Nearly 9,000 people have died from the epidemic, the WHO said while admitting that it was impossible to give a precise number as the outcomes of some cases remained unknown.

All but 15 of the fatalities have happened in the worst-affected west African countries of Sierra Leone, Liberia and Guinea. In the week up to February 8 a total of 144 new cases were registered, compared to 124 the previous week. Guinea reported a sharp increase in incidence, with 65 new confirmed cases compared with 39 the week before,” the WHO said in its report. Transmission also remains “widespread” in Sierra Leone, which reported 76 new confirmed cases.

Liberia again reported a low number of new confirmed cases, just three over the week in question. Last week Britain’s Wellcome Trust said that clinical trials it was funding for a new Ebola treatment in Liberia had been halted due to the fall in new cases. Ebola, one of the deadliest viruses known to man, is spread through direct contact with the bodily fluids of an infected person showing symptoms such as fever or vomiting.

People caring for the sick or handling corpses are at highest risk, and the disease is best contained by limiting exposure through patient isolation and safe burials. A drop in new cases in recent weeks had given rise to optimism that the worst was over, before the WHO last week reported the first rise for 2015 in the weekly number of cases in all three countries. “The spike in cases in Guinea and continued widespread transmission in Sierra Leone underline the considerable challenges that must still be overcome to get to zero cases,” the WHO said in its latest report.

“The infrastructure, systems, and people needed to end the epidemic are now in place; response measures must now be fully implemented,” it added. The International Red Cross and Red Crescent Movement on Wednesday denounced a series of violent attacks on its volunteers battling the deadly Ebola epidemic in Guinea. The world’s largest humanitarian network said the latest case involved two burial workers who were beaten up on Sunday by a mob in the western town of Forecariah. (AFP)