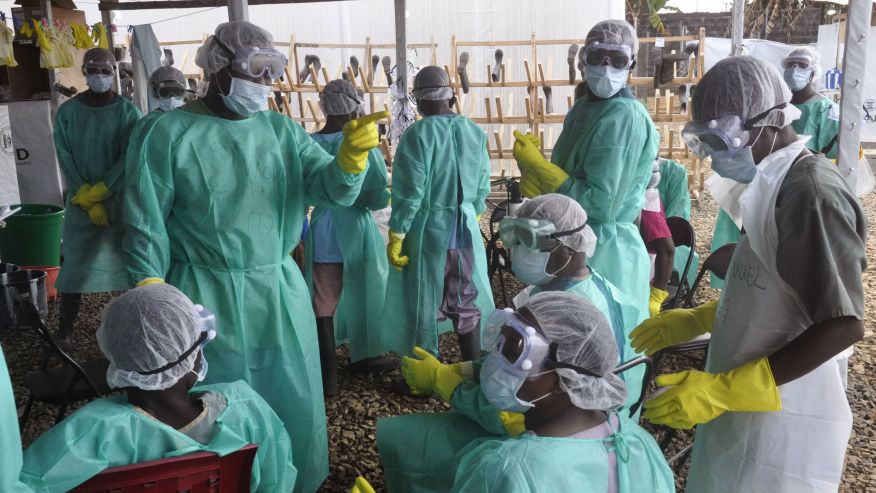 The first large-scale trials of two Ebola vaccines were due to begin in Liberia on Monday, the partnership conducting the research said.

The vaccines contain harmless fragments of the virus that trigger an immune response, according to the Partnership for Research on Ebola Vaccines in Liberia (PREVAIL), a collaboration between the United States and Liberia.

“The study will begin at Redemption Hospital in Monrovia. Subsequent sites will be added at other hospitals in and near Monrovia after the first 600 participants join the study,” it said in a statement. Researchers, led by the US National Institutes of Health, aim to enlist around 27,000 healthy men and women aged 18 and over, PREVAIL said. PREVAIL said the vaccines could cause pain, redness or swelling in the injected arm, as well as fever, headaches and tiredness, but added that the side-effects “typically have been mild to moderate and have gone away on their own”. The study was launched at the Redemption Hospital on Sunday at an event attended by Liberian Vice-President Joseph Boaikai.

“We hope that this scientific undertaking we launch here today will get answers for the mystery surrounding this disease,” he said. – ‘Need for speed’ – There is currently no vaccine to guard against Ebola on the world market, and no specific drug approved to treat it, even though the virus first emerged in the 1970s. Researchers have said that it remains unknown what level of immune response is needed to protect humans from Ebola, which causes often fatal haemorrhaging, organ failure and severe diarrhoea. Liberia, Sierra Leone and Guinea have registered almost 9,000 deaths since the beginning of the worst outbreak on record in December 2013, although experts believe the real toll could be significantly higher. The World Health Organization (WHO) said last week however that the countries reported fewer than 100 new lab-confirmed cases in the past week for the first time since June. It’s fantastic that large-scale trials of the first candidate Ebola vaccine are getting underway in Liberia, a country that has suffered enormously at the hands of this disease,” said Jeremy Farrar, director of the Wellcome Trust.

Wellcome is funding tests on the GSK candidate in Britain and Mali and parallel studies of other vaccines in Geneva, Gabon, Kenya and Guinea. “The WHO confirmed last week that infection rates there continue to fall, which emphasises the need to complete these crucial trials as quickly as possible,” Farrar said. “The international response that has got us this point has been phenomenal and we must keep on course until the infection rate is brought down to, and remains at, zero. “Vaccines and therapeutics may play an important role in reaching this goal and will almost certainly contribute to our response to future outbreaks.” (AFP)