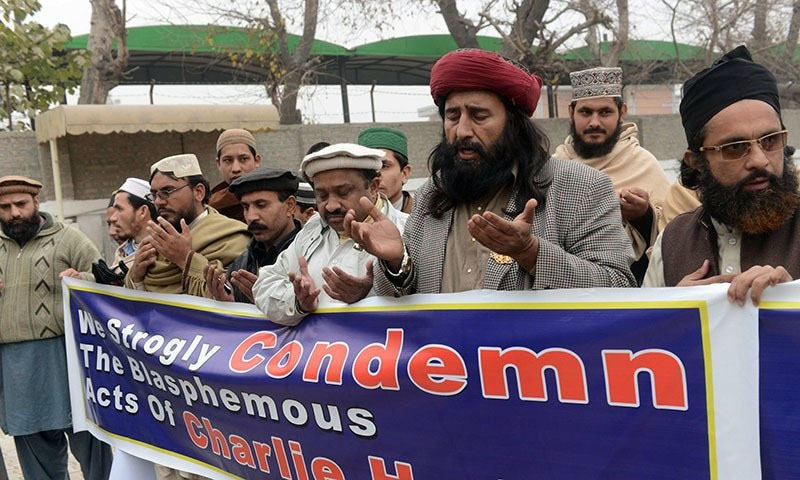 As the Parliament on Thursday unanimously adopted a resolution tabled against blasphemous caricatures published in French weekly satirical magazine Charlie Hebdo, dozens in Lahore marched against the publication.

In a statement issued from Riyadh, Prime Minister Nawaz Sharif also condemned the French magazine. “Freedom of speech should not be used to hurt religious sentiments of any community,” the statement read, adding that publication of provocative material should be discouraged by the international community. In the National Assembly, Federal Minister for Railways Khawaja Saad Rafique tabled the resolution and read it out. The resolution called upon the international community, including Organisation of Islamic Cooperation (OIC) and the European Union (EU), to take action against publishing such material. “These cartoons are a conspiracy to create misunderstanding among civilisations,” the resolution reads. The House maintained that such moves by Charlie Hebdo are against freedom of expression, and said “ridiculous religious material is condemnable”.

Speaking to media representatives outside the Parliament House, Minister for Religious Affairs Sardar Shahjahan Yousaf said that parliamentarians along with the people of Pakistan are against such acts, adding that they will not be tolerated. Later, Rafique said that all political parties have unanimously condemned the act the French publication as such elements are being used to defame Islam. He added that Pakistan always vowed for religious rights while such elements are conspiring against the Muslim Ummah.

Lawmakers, led by Rafique, marched outside Parliament, chanting the slogan “In the service of Prophet Muhammad (PBUH), we are willing to die”. Dozens of parliamentarians, including women, participated in the march. Protesters denouncing the cartoons published by Charlie Hebdo marched to the American Consulate in Lahore Thursday. Tehreek-i-Sirat-i-Mustaqeem held a rally outside the Punjab Assembly, which has now reached the American Consulate in Lahore. While passionately sloganeering, the protesters said that the French publication’s decision to publish a blasphemous cartoons after the attack on its office will not be tolerated.

Traffic is clogged as a result of the protest as a heavy contingent of police is deployed outside the Consulate. Last week, the magazine’s offices in Paris were attacked by gunmen, killing 12 people in cold blood in the worst attack in France in decades. Victims included four prominent cartoonists, among them the editor-in-chief, Stephane Charbonnier, who had lived under police protection for years after receiving death threats. The satirical newspaper gained notoriety in Feb 2006 when it reprinted sacrilegious cartoons that had originally appeared in Danish daily Jyllands-Posten. The cartoons set off a wave of violence in the Middle East which claimed 50 lives. Its offices were fire-bombed in Nov 2011 when it published an objectionable sketch. Despite being taken to court under anti-racism laws, the weekly continued to publish controversial cartoons. Earlier this week, the publication ran its first issue since the attacks, featuring a bearded man holding a sign reading “Je suis Charlie” (“I am Charlie”).

While last week’s attack sparked global outrage, dozens of people in Peshawar paid tribute Tuesday to the brothers who carried out the murders. Last week, the Foreign Office had condemned the deadly shooting at Charlie Hebdo that left 12 people dead. FO spokesperson Tasneem Aslam had said that Pakistan deplores all forms of terrorism and extends condolences to the government of France and its citizens for the loss of life. Aslam had also said that Pakistan’s stance over blasphemous cartoons is very clear. While strongly condemning the attack, she added that Pakistan in the past had moved a resolution in the United Nations and the world needs to get out of Islamophobia. Aslam had further said, “we are confident that the international community will persist in standing firm against terrorism and that the culprits behind terrorist activities will be brought to justice.”