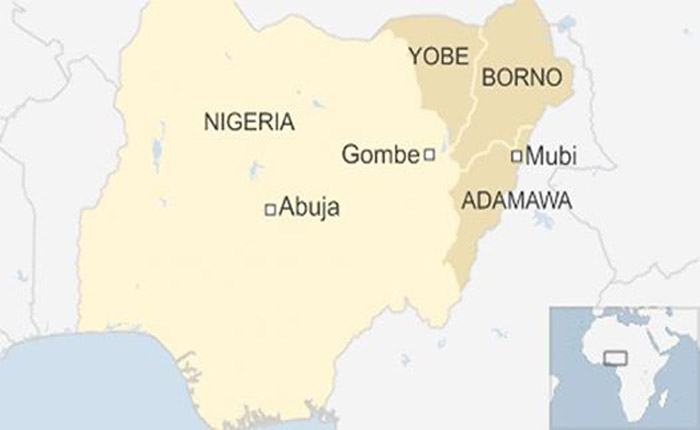 Two bomb attacks at a bus station and a market in north Nigeria killed at least 27 people and wounded around 60, officials said.

No group immediately claimed responsibility for either attack. Boko Haram insurgents have repeatedly set off bombs targeting civilians, especially in the northeast where they are trying to carve out an Islamic state.

The first one, in the city of Gombe, involved two explosions in quick succession. “The second blast was worse than the first one because many people rushed to the scene and were affected. Many were killed and many injured,” witness Mohammed Fawu told Reuters by phone. An emergency services official put the toll at 20, with twice as many wounded. Setting off twin bombs is a classic guerrilla tactic which seeks to maximise casualties. Hours later, an explosion shook a market in the north Nigerian city of Bauchi, killing at least seven people and engulfing it in flames. Police spokesman for Bauchi state Haruna Mohammed said 19 people were also wounded. Large sections of the central market area were on fire, sending plumes of smoke into the air, a Reuters witness said.

Medics were driving some wounded away in ambulances. Bauchi state and Gombe state are next door to each other. The blast had been caused by bombs but it was not yet known whether a suicide bomber was involved. The military did not respond to a request for comment. Violence in the northeast is killing civilians on a daily basis – about 10,340 this year, according to the Council on Foreign Relations think tank. The insecurity is a headache for President Goodluck Jonathan less than two months before closely fought elections in which he faces a rival, Muhammadu Buhari, seen as tough on security. It was the second such attack on Gombe’s public transport system in as many months. At the end of October, a car bomb at a bus stop killed at least 10 people. The campaign for an Islamic state by Boko Haram, whose name means “Western education is sinful,” has become the gravest security threat to Nigeria,

Which is Africa’s biggest economy, most populous nation and top oil producer. The killings and abductions raise questions about the ability of security forces to protect civilians, especially around the Cameroon border in the north. Cameroon said on Monday it had dismantled a Boko Haram training camp, arresting or killing dozens of militants and rescuing 84 children being trained there. Suspected Boko Haram gunmen kidnapped 172 women and children and killed 35 other people a week ago during a raid on the northeastern village of Gumsuri.

Around 200 girls snatched in April by the group from a school in the village of Chibok remain in captivity. In unrelated violence, pirates in the oil-producing Niger Delta opened fire on a military boat on Monday in the Nembe creek, an area where oil companies have major pipelines, killing three soldiers, two security sources told Reuters. –Reuters