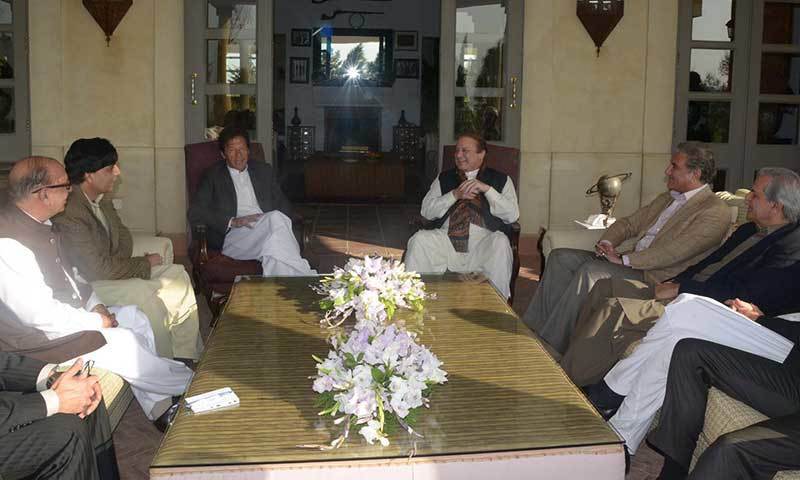 Following the Peshawar tragedy, Prime Minister Nawaz Sharif has convened a Multi-Party Conference (MPC) in Peshawar and invited all parties represented in parliament, including the PTI, to join hands and forge a renewed commitment to fight terrorists and extremists.

Information Minister Pervaiz Rashid said on Tuesday that the PM had invited heads of all parliamentary parties to show the whole world that the entire nation stood against terrorism and extremism. “The conference has been called to obtain the support of all political forces in the war against terror,” he said. A spokesperson for the Pakistan Tehreek-i-Insaf (PTI) told Dawn that Imran Khan had announced his plans to attend the MPC, along with PTI Vice Chairman Shah Mehmood Qureshi and Khyber Pakhtunkhwa Chief Minister Pervez Khattak. The PTI has also summoned a meeting of its parliamentary committee on Wednesday to review security issues in the province and political issues to be taken up with the ruling Pakistan Muslim League-Nawaz (PML-N). Pakistan People’s Party (PPP) Co-Chairperson Asif Ali Zardari denounced the attack on Army Public School, calling it “the most barbaric, atrocious and inhuman act… in any age and any time” and also announced three days of mourning in Sindh.

The former president said that the Boko Haram of Pakistan had struck in the fashion of their kinsmen in Africa by targeting schoolchildren. “This is a dark day in the history of this country. The crime has been committed on the day when Pakistan was dismembered in 1971,” he said. “Let it be said that the whole nation stands behind law-enforcement agencies in the ongoing operation against militants and salutes the sacrifices, courage and determination of our armed forces and the courage and resilience of the people,” he said. Leader of the Opposition in the National Assembly Syed Khurshid Shah said that the brutes who designed this massacre of innocent children of the nation must be given exemplary punishment. He said, “We shall raise our voices at every forum to force the government to decide once and for all to root out terrorism from the country. Such terrorism has no peer in the world and we cannot bear such loss of life in the future.” Calling terrorism the biggest challenge facing the country, Punjab Chief Minister Shahbaz Sharif urged all political forces to come together to fight this scourge.

“The need of the hour is that people should give up their personal agenda and unite to fight terrorism,” he said. Mutahidda Qaumi Movement (MQM) chief Altaf Hussain said that it was not just terrorists and extremists that should be punished, but also their supporters, abettors, financers and facilitators. Otherwise, he said, the menace would continue to grow and would not be rooted out. He also said that all political parties should send volunteers to the army to fight terrorists. Jamaat-i-Islami (JI) Emir Sirajul Haq stressed that the entire nation needed to be on the same page in their opposition to terrorism and extremism. Awami National Party (ANP) chief Asfandyar Wali said that political parties should not confine themselves to mere lip service, but should take the lead in trying to find a solution to the problem. Amir Wasim adds: Separately, the main opposition PPP asked the government to immediately convene a joint session of parliament to discuss the current security situation in the country in the wake of the Peshawar tragedy.

Talking to Dawn on Tuesday, Senator Raza Rabbani, parliamentary leader of the PPP in the Senate, said that if the government or military officials believed they had some sensitive information to share with them, an in-camera session could be convened. He regretted that parliament had never been taken into confidence on the progress made in the ongoing military operation in North Waziristan since it was launched in June. -dawn

Malala Speaks Against The Cowardly Act