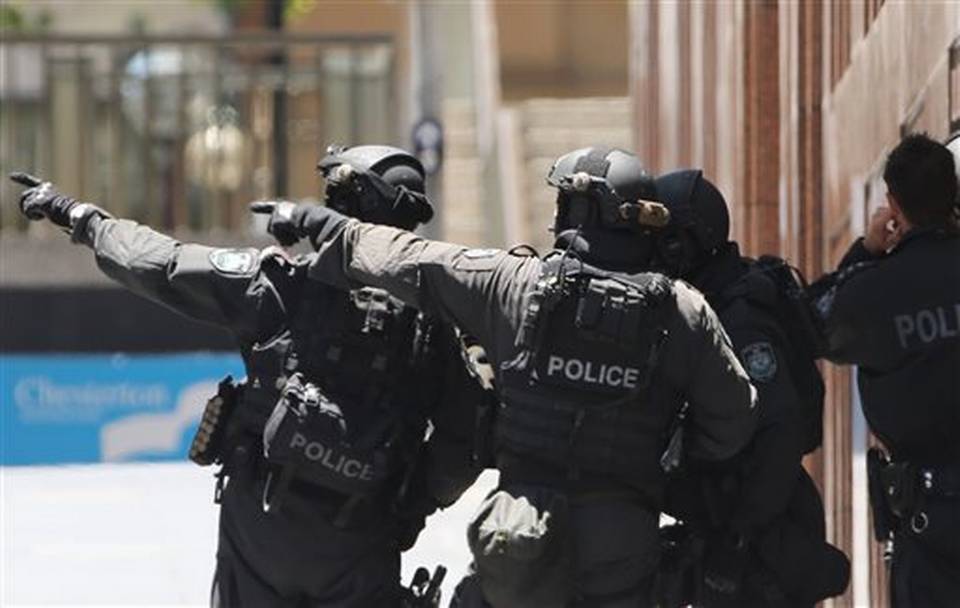 A gunman took an unknown number of people hostage inside a downtown Sydney chocolate shop and cafe at the height of Monday morning rush hour, with two people inside the cafe seen holding up a flag believed to contain an Islamic declaration of faith.

Four hours after the incident first erupted inside the Lindt Chocolat Cafe, New South Wales state Police Commissioner Andrew Scipione said police had not made direct contact with the gunman, did not know his motivation and were not sure how many people were being held inside. “We have not yet confirmed it is a terrorism-related event,” Scipione said. “We’re dealing with a hostage situation with an armed offender and we are dealing with it accordingly.” The cafe is located in Martin Place, a plaza in the heart of the city’s financial and shopping district that is packed with holiday shoppers this time of year. Many of those inside the cafe would have been taken hostage as they stopped in for their morning coffees.

Hundreds of police flooded into the area, streets were closed and offices evacuated. The public was told to stay away from Martin Place, home to the state premier’s office, the Reserve Bank of Australia, and the headquarters of two of the nation’s largest banks.

The state parliament house is a few blocks away. Television footage shot through the cafe’s windows showed several people with their arms in the air and hands pressed against the glass, and two people holding up what appeared to be a black flag with white Arabic writing on it. Zain Ali, the head of the Islamic Studies Research Unit at the University of Auckland, said it was difficult to read the message because media images showed only the lower part of the flag. But he believed it was the Shahada, or declaration of faith, largely because a black flag with white writing in a contemporary context often contains that message. He said he could make out the word “Muhammad.” Ali said the Shahada translates as “There is no deity of worship except God (Allah), and Muhammad is the messenger of God”. It is considered the first pillar of Islam’s five pillars of faith, and has been used by groups like Al Qaeda and Islamic State but wasn’t invented by them, Ali said.

“We don’t know whether this is politically motivated, although obviously there are some indications that it could be,” Prime Minister Tony Abbott told reporters in the nation’s capital, Canberra. We have to appreciate that even in a society such as ours, there are people who would wish to do us harm.” A police spokeswoman said no injuries had been reported from the incident. Heavily armed officers were lined up outside the cafe, and a man with a backpack inside the cafe could be seen walking back and forth in front of the glass doors.

“Police have been in attendance and have controlled the situation from very early this morning,” said Scipione, the police commissioner. “We are at this stage continuing to secure and make sure that we are doing all we can to bring this to a peaceful outcome.” Abbott said the National Security Committee of Cabinet met to be briefed on the situation. “The whole point of politically motivated violence is to scare people out of being themselves,” Abbott said. “Australia is a peaceful, open and generous society — nothing should ever change that. And that’s why I would urge all Australians today to go about their business as usual.” -dawn