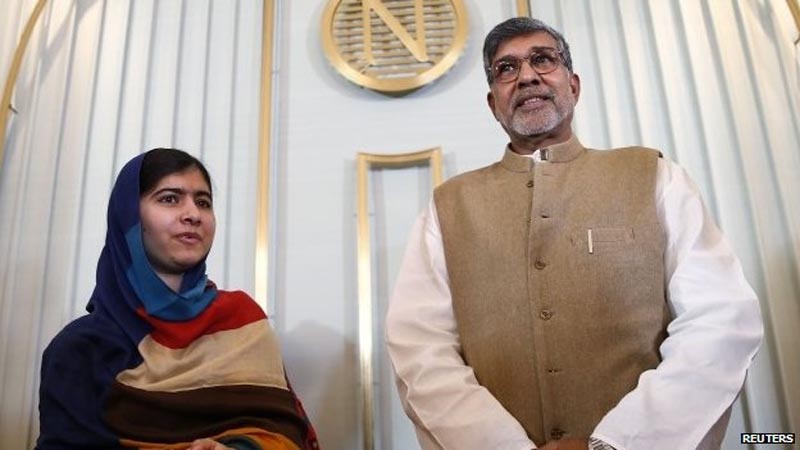 Pakistani activist Malala Yousafzai has told the BBC ahead of receiving the Nobel Peace Prize on Wednesday that she hopes to pursue a career in politics.

She said that she may even aspire to be prime minister of Pakistan once she has completed her studies in the UK.

Ms Yousafzai has been jointly awarded the prize with Kailash Satyarthi, an Indian child rights campaigner. Ms Yousafzai was shot in the head by Taliban gunmen in October 2012 for campaigning for girls’ education. She is the youngest ever recipient of the prize. “I want to serve my country and my dream is that my country becomes a developed country and I see every child get an education,” Ms Yousafzai told BBC HARDtalk’s Stephen Sackur in Oslo. She said that she had been inspired by Benazir Bhutto – a woman who twice served as Pakistani prime minister before her murder in 2007.

“If I can serve my country best through politics and through becoming a prime minister then I would definitely choose that,” Ms Yousafzai said. The teenager said it was a great honour to win the prize alongside Kailash Satyarthi. “I had this wish from the beginning to see children going to school and I started this campaign,” she said. “Now this peace prize is very important for me and it has really given me more hope, more courage, and I feel stronger than before because I see many people are with me. “There are more responsibilities but I have also put responsibilities on myself. I feel I am answerable to God and to myself and that I should help my community. It’s my duty.”

The laureates, who have split the $1.4m (£860,000) prize money, were nominated for their work to protect children from slavery, extremism and child labour at great risk to their own lives. Ms Yousafzai said she was disappointed that the prime ministers of India and Pakistan were not attending the award ceremony. But correspondents say that the presence of Malala Yousafzai and her Indian co-winner in Oslo has attracted hundreds of people into the freezing streets hoping to get a glimpse of them. The Nobel committee said earlier that it was important that a Muslim and a Hindu, a Pakistani and an Indian, had joined in what it called a common struggle for education and against extremism. -bbc