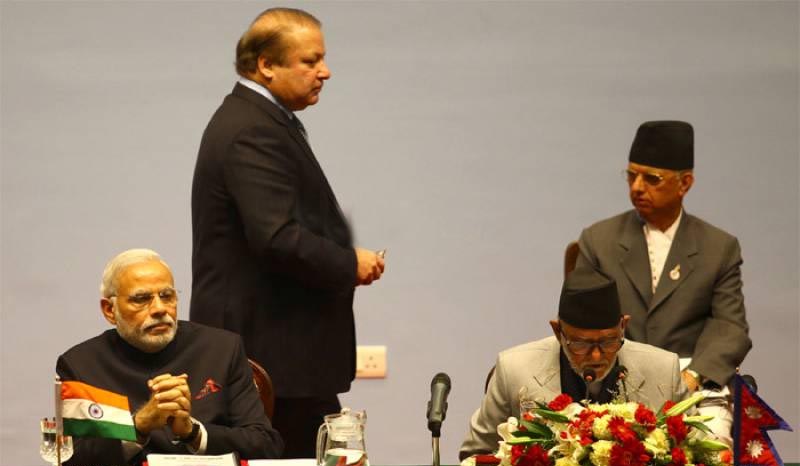 Prime Minister Nawaz Sharif and Indian Premier Narendra Modi on Wednesday spent a very busy day and yet remained apart from each other, carrying pulled-up and tension-ridden faces.

No evidence was available if the two major Saarc partners had even exchanged pleasantries when they assembled at the City Hall, the venue of the 18th South Asian Association for Regional Cooperation (Saarc) Summit which was under very tight and foolproof security arrangements.

Informed diplomatic circles have indicated that having been disappointed with the outcome of the 18th Summit, the Pakistani prime minister may shorten his stay in Kathmandu and return to Islamabad on Thursday instead of leaving on Friday morning, as per his original plan. Such was the body language of Nawaz and Modi that generated great disappointment for those who were actively engaged in securing a meeting between them to change the entire environment in the Nepalese capital.  The tension between the two sides was clearly visible in their speeches they delivered at the inaugural session. Nawaz adopted a matter of fact approach and did not touch upon any sensitive issue, laying his focus on objectives of the regional organisation.  On the other hand, his Indian counterpart not only mentioned the issue of Mumbai attacks but also talked of terrorism which was not part of his original speech. This departure from the text of the speech was noticed by all those present in the City Hall and a huge lot of journalists present at the media centre at Hotel Radisson.

Modi speech was influenced with the approach of being a policeman of the region. “We will address your concerns and give you a level playing field in India. But, I encourage you go attract Indian investments to produce for the Indian market and create jobs for your youth,” this was the tone and tenure of his address to the gathering where heads of states and governments from seven member countries and representatives of 19 observers states were sitting.  Such was the atmosphere at the City Hall that led to dying down of all hopes and optimism generated during the past two days that Nawaz and Modi interaction would pave the way for the unprecedented success of the Saarc Summit.  No one was actually willing to talk about the prospects of any such eventuality. Well over 170 journalists accompanying Narendra Modi were seen haunting members of Pakistani delegation to secure quotes to use in their reports. They chased Sartaj Aziz to the bilateral meeting venue but he refused to talk to any Indian media person.

[contentblock id=2 img=gcb.png]
However, a new issue has surfaced and that is Beijing seeking full membership of Saarc, presenting the argument that China has common border with five South Asian states. So far, according to insiders at the Summit venue, India is the only country hindering China’s entry into the regional organisation. However, China is making well thought-out moves to make its way into Saarc by making massive investment in member states.
The heads of delegations attending the Summit would today (Thursday) proceed to retreat where there is a possibility of closer interaction among them. It would largely depend on Premier Modi to demonstrate such gestures that could lead to some positive development in Indo-Pak bilateral relations.  Prime Minister Nawaz Sharif on Wednesday calling for a “dispute-free South Asia” urged the regional countries to set aside their mutual conflicts and focus on fighting their common issues of poverty, diseases and illiteracy. Addressing the summit, he stressed that the gap between the promise of Saarc and reality of its accomplishments needs to be bridged.

“My vision for our region is a dispute-free South Asia, where instead of fighting each other, we jointly fight poverty, illiteracy, disease, malnourishment and unemployment,” the prime minister told the gathering of the eight-member states that represent 1.5 billion population.  He stressed the need for building on convergences, minimise divergences and augment complementarities for the greater good of the people of this region. “We invest in our youth to unleash their creativity, talent and enterprise. We strengthen our bonds of trust so that we can solve our problems,” he said.  PM Nawaz Sharif said the economic development of South Asia was closely linked to the availability of energy at an affordable price. He said with abundant alternate energy resources available region-wide, there was a need to collectively focus on harnessing indigenous energy production potential. “We should also consider arrangements for trans-regional oil and gas pipelines.”

The Premier said Pakistan by virtue of its geographic location at the confluence of South Asia, West Asia and Central Asia, was a natural economic corridor for the region. He said promoting regional connectivity was one of the seven pillars in Pakistan’s development strategy.  “My government is actively pursuing this initiative which has the potential to integrate South Asia, China and Central Asia, the three engines of growth in Asia. A soft visa regime would greatly facilitate the realisation of these objectives,” PM Nawaz Sharif said.  The prime minister said Pakistan attaches high importance to Saarc as the organisation has come to epitomise the hopes and aspirations of the peoples of this region, for peace, progress and prosperity. “If we look at a region which is home to nearly one quarter of humanity on the planet, it is mired in poverty, disease and illiteracy, with lowest human and social indicators.”

He said more than one fifth of the population of the region was between 15-24 years of age – the largest number of youth to ever make transition into adulthood. He regretted that the region, however, accounts for only 6 percent of world GDP in purchasing power parity, and only 4 percent share in world trade, while attracting only 3 percent of global FDI.  Mentioning the theme for the 18th Saarc Summit – ‘Deeper Integration for Peace and Prosperity’, he said it was most appropriate and reflected the common desire for promoting mutual understanding and reaching out to each other, to create a win-win scenario. “We are one of the least integrated regions in the world,” he noted. -nation

Police Get Ready for Nov 30 in a Big Way