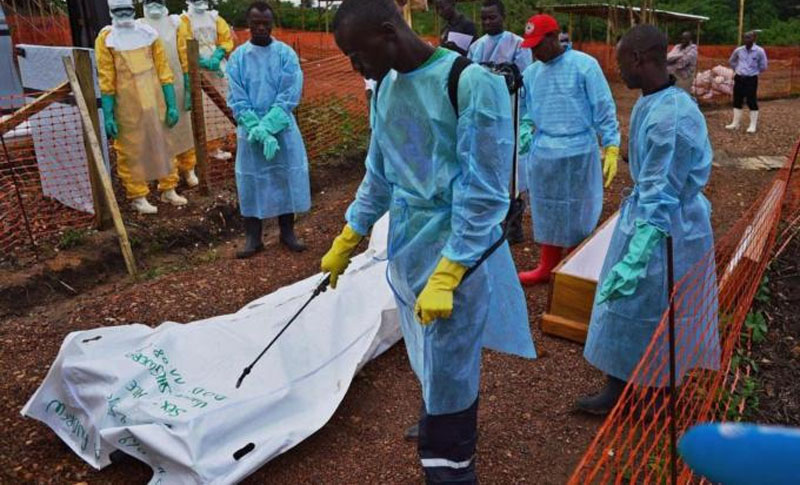 Burial workers in Sierra Leone have dumped bodies in the street outside a hospital in protest at authorities’ failure to pay bonuses for handling Ebola victims.

Residents said up to 15 corpses had been abandoned in the eastern town of Kenema, three of them at a hospital entrance to stop people entering. The head of the district Ebola Response Team, Abdul Wahab Wan, said on Tuesday that the bodies included those of two babies.

A spokesman for the striking workers, who asked not to be identified, said they had not been paid their weekly hazard allowance for seven weeks. Authorities acknowledged the money had not been paid but said that all the striking members of the Ebola Burial Team would be dismissed. “Displaying corpses in a very, very inhumane manner is completely unacceptable,” said Sidi Yahya Tunis, the spokesman for the National Ebola Response Centre. He added that the central government had paid the money to the district health management team. “Somebody somewhere needs to be investigated (to find out) where these monies have been going,” he told Reuters news agency.

Healthcare workers have repeatedly gone on strike in Liberia and Sierra Leone over pay and dangerous working conditions. Two weeks ago, workers walked off the job at a clinic in Bo in Sierra Leone. Sierra Leone has become the bigges The outbreak appears to be coming under control in neighbouring Liberia and Guinea, but infection rates have accelerated in Sierra Leone.

A medical source said on Tuesday that another Sierra Leonean doctor, Aiah Solomon Konoyeima, had tested positive for the disease. All seven Sierra Leonean doctors who have previously caught Ebola have died of it. The head of a special UN mission on Ebola acknowledged on Monday it would not meet the target of containing the outbreak by early December.

China said on Tuesday it would step up its Ebola response. “More then 600 medical staff and public health experts have been sent to the affected countries in western Africa and the number is estimated to grow to 1,000 in the coming months,” said Cui Li, Chinese vice minister for national health, at the opening of an Ebola Treatment Unit in Monrovia.

Despite pledges of hundreds of millions of dollars in aid, and the deployment of US and British troops, the weakness of healthcare systems and infrastructure in the affected countries has hampered the fight against the worst outbreak of the Ebola virus on record.

Watch Video: Security in Ferguson Is Tightened After Night of Unrest