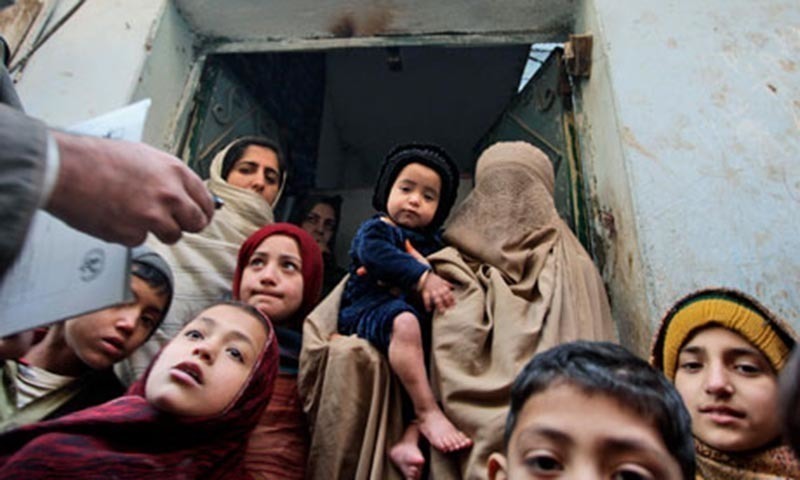 Polio vaccination began in South Waziristan on Monday after a break of two-and-a-half years. World Health Organisation (WHO) has termed it a positive development for the eradication of polio virus from the country.

Taliban had imposed a ban on polio vaccination in June 2012 after it was revealed that a physician, Dr Shakeel Afridi, had helped CIA run a fake hepatitis vaccine programme in Abbottabad, to confirm Osama bin Laden’s presence in the city by obtaining DNA samples. Country Head WHO Michel Torres told Dawn that the beginning of a polio vaccination campaign in South Waziristan was a positive development and every child should be vaccinated. “WHO has been focusing on polio-vaccination for the eradication of the virus from all over the country. We expect better results as now there will be access to South Waziristan,” he said. When asked about the attack on a polio vaccination team in Shabqadar area of Charsadda on Monday by Tehreek-i-Taliban Pakistan, Mr Torres said the WHO did not deal with security issues.

“However security issues create a challenge for vaccinators and I have to say that polio workers are courageous,” he said. Spokesman for Federally Administered Tribal Areas (Fata) Secretariat Adnan Khan told Dawn that the launch of the polio vaccination campaign in South Waziristan, after two-and-a-half years was a big achievement.

He said South Waziristan Agency had been divided into 37 clusters and as many as 68,000 children will be targeted by the vaccination campaign. “Names of areas and other details cannot be revealed for security reasons,” he said. “Local Jirgas, Maliks and the political administration have been playing a very important role in the campaign which was facilitated by the Pakistan Army,” he added.

“The campaign conducted in South Waziristan on Monday was a door to door campaign which is a big achievement because even in North Waziristan vaccination was carried out through Hujras and mosques,” he said. South Waziristan is the biggest agency of Fata in terms of area and remained the hub of Taliban for many years but after the operation by Pakistan Army, the situation is changing rapidly. An official of Ministry of National Health Services, requesting not to be identified, said if children of the agency were vaccinated, the menace of polio can be tackled because almost 90 per cent polio cases, recorded in the country in 2014, belonged to Fata. “It is a big achievement to start polio campaign, and it serve as a landmark for the eradication of polio virus from the country,” he said.

Meanwhile, the Prime Minister’s Focal Person on Polio Eradication Ayesha Raza Farooq condemned the attack on the polio team in Charsadda, Khyber Pakhtunkhwa. She said the team was carrying out the noble duty of protecting children from a life crippling disease. Those harming health workers are enemies of Pakistan and the entire humanity.

“Such cowardly attacks against our goal of polio free Pakistan will further strengthen our resolve to stamp this menace from the country. I urge the provincial government to take all necessary measures to protect polio teams and ensure safe conduct of polio vaccination campaigns,” Ms Farooq said. “Those who are involved in attacks on such activities are enemies of our nation. We must combine efforts to protect our children from this debilitating disease,” she said. -dawn