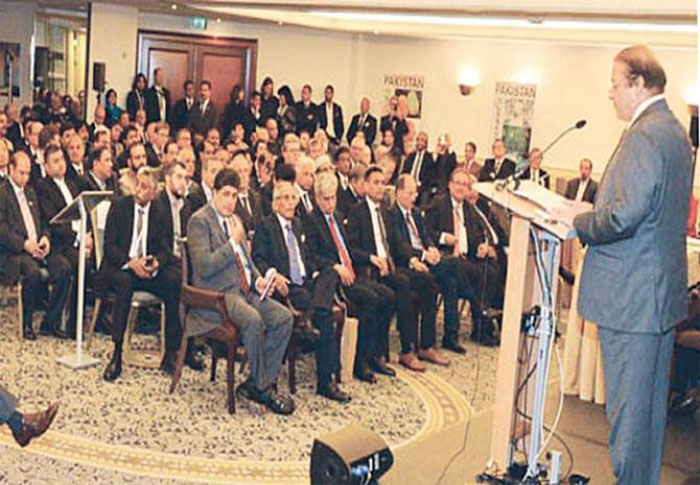 Prime Minister Muhammad Nawaz Sharif on Monday invited German entrepreneurs to invest in Pakistan and participate in its privatization process, assuring it will be transparent and strictly in accordance with the international best practices. “Pakistan is one of the most investor-friendly countries in the world.

We allow 100% foreign ownership, with no limit on repatriation of profits, dividends or other funds in the currency of the country of origin,” the Prime Minister said while addressing the Investment Forum here. He said Pakistan would like to expand FDI (foreign direct investment) in energy, infrastructure development, food, pharmaceutical, chemicals, engineering, agriculture and agro-based industry, mining, and oil and gas exploration. The Prime Minister said, “Energy sector is our highest priority, and our biggest concern. Unless we overcome the problem of power shortages swiftly and effectively, there can be no meaningful development in the country.”

He said Pakistan was focusing on improving the efficiency of existing power plants, addressing problems of power generation and distribution.  “At the same time, we have embarked on a massive programme of power generation, from all available sources, including hydel, coal, solar and wind,” he added. “I invite you all to participate in the privatization process, which will be transparent and strictly in accordance with international best practices,” he added. The Prime Minister said Germany had been a major investor in Pakistan. Large German companies like Merck, Hoechest, Bayer, BASF, Siemens, Linde and Metro had sizeable investment in Pakistan, he added. Nawaz said, “I welcome you all to contribute towards tomorrow’s Pakistan. I wish to assure you that the government will extend full support to your initiatives.”

The Prime Minister said the present government had finalized the planning for installation of 7000 MW of coal, solar and wind power projects by year 2017. He said his government aimed at developing Thar as the energy capital of Pakistan, which could provide affordable and reliable energy for tens of decades to the country’s households, commerce and industry. He said the government’s energy planning framework was futuristic and yet time-bound and catered for the core concerns of affordability and reliability, which were the country’s crucial missing links so far. The Prime Minister said he looked forward to the establishment of an office of the German Chamber of Commerce in Pakistan and to the enforcement of the Bilateral Investment Treaty.

He said Pakistan, a county of 180 million industrious and enterprising people, was prepared to march in step with its friends and partners, in the pursuit of common goals. “Ever since my government took over, we have consistently pursued the vision of creating a peaceful neighbourhood around Pakistan through our policy of non-interference and constructive engagement. We have extended the hand of friendship to all our neighbours,” he mentioned.  In this spirit, the Prime Minister said, he visited India early this year, to attend the swearing-in ceremony of the new Indian Prime Minister. “Regrettably, our gestures were not reciprocated. However, we remain committed to positive engagement,” he added.

The Prime Minister said, “We are interacting closely with the new leadership in Afghanistan, while consolidating our relations with Iran and China, for promotion of regional stability and development. I believe that the future holds great promise for our region.” Nawaz Sharif said Pakistan’s location connecting Central, South and West Asia, promised limitless possibilities for regional and global peace and prosperity. The Prime Minister said strategically, Pakistan was the natural regional hub of all economic activity, having necessary infrastructure in place, as well as the manpower.”The need of the hour is to improve connectivity and efficiency by spreading a network of roads and railways, and harvest the rewards of the communication revolution throughout Pakistan,” he added.

“Our tax collection has increased by 16 per cent. Inflationary pressures have softened. Large scale manufacturing is showing sustained improvement. Credit to private sector has increased manifold, as the government has reduced its own borrowing significantly”, he added. The Prime Minister said the capital market’s outlook was positive with the Karachi Stock Exchange being one of the best performing in the world. “Just today, the market registered an increase of 351 points, reflecting the growing confidence of local and international investors in our economy”, he added. The Prime Minister said, “We hope to maintain this positive momentum. We are looking at a strong growth curve in the coming years.” “The growing confidence reposed by major financial markets and multilateral financial institutions in our economic management, justifies this belief,” he said.

The Prime Minister said his government had formulated a comprehensive, well-thought programme for future growth and development which it had named “Vision 2025” programme. “This is essentially aimed at creating a globally competitive and prosperous Pakistan, to make it an industrialized and knowledge-based high income country, in the next few years,” he added. The Prime Minister said, “Our vision is to achieve macroeconomic stability, revive economic growth, reduce poverty and improve governance.” We are also undertaking wide-ranging structural reforms, to enhance economic incentives and improve resource allocation, as well as to remove impediments to private sector development,” he added. The Prime Minister offered warm felicitations to the people of Germany on the 25th anniversary of German re-unification. -nation

Watch Video: At Least 50 Killed in Accident Near Sukkur

Another Polio Case Found in Fata

Another Polio Case Found in Fata