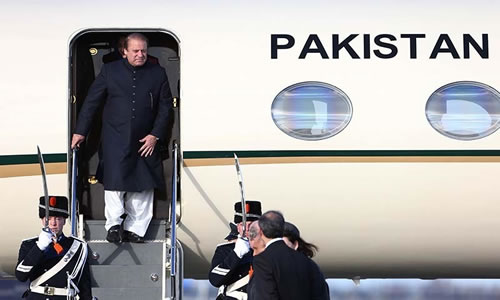 The court was hearing a petition on Monday filed by Advocate Javed Iqbal Jafri which stated that the prime minister was staying at a hotel where the cost of a room was Rs800,000 per night.

Jafri had stated in his petition that the money was being taken from the national treasury and was the property of the people of Pakistan but the premier was spending it on furthering his personal businesses and going on leisurely foreign trips.

The petitioner also requested the court to include the prime minister and his family’s name in the Exit Control List (ECL). Taking notice of the allegations, Justice Mansoor Ali Shah of the LHC directed the federal government to submit a record of the expenses incurred during the prime minister’s foreign trips by November 6.

Earlier on Oct 2, the court had admitted the petition for hearing, which referred to the prime minister and his wife taking “luxurious international tours on government funds”, adding that the premier had made frequent visits to the UK, China and Turkey.

The prime minister has been widely criticised in the past regarding his foreign trips and apparent neglect for problems at home. During his first five months in the job, the chief executive of the country had reportedly spent nearly a month abroad on one private and five official visits. – DAWN