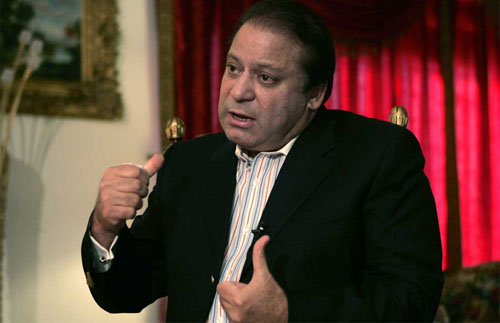 While felicitating the nation on the occasion of Eid ul Azha, Prime Minister Nawaz reiterated his resolve to incessantly endeavour to bring to fruition the national development goals that he has undertaken to deliver.

“I am grateful for the confidence the nation has reposed in me to continue pursuing our national agenda aimed at making Pakistan a prosperous country amongst the comity of nations,” the prime minister said in his message on the occasion of Eidul Azha. He mentioned the difficulties faced by the people affected by recent unprecedented floods as well as the sacrifices rendered by internally displaced persons of tribal areas in the wake of Operation Zarb-e-Azb.

Nawaz assured that the government will make all-out efforts to provide them utmost succour in these times of trial. He also lauded the unflinching resolve shown by the country’s armed forces in combating the violent scourge, which he said “speaks volumes about the sacrifice they are willing to render for our freedom, well-being and honour.” The prime minister said, “The spirit of Eid ul Azha this year may serve as a poignant reminder to the disconcerted elements not very well conversant with the supremacy of national consensus bestowed on democratic forces that sowing discord is diametrically opposite to the spirit of accommodation and tolerance.”

“The credentials of the democratically elected representatives have shown resilient adherence to the practices of prudence, decency, justice and fair play that are required to be emulated by all factors defying them,” he added. About the recent floods, the prime minister said, “Pakistanis have been and are going through ravages of unprecedented floods causing widespread devastation that witnessed a surge of public sympathy and sacrifice for the affected.” “Let me assure all Pakistanis in distress that your resolve has deeply impressed upon us the need to hasten and increase our efforts to provide you utmost succour in these times of trial,” he added.

Regarding extremism, the prime minister stated, “We also encountered vicious spectre of violent extremism through the extremely laudable Operation Zarb-e-Azb, undertaken by our valiant armed forces.” He said the unflinching resolve shown by the armed forces in combating the violent scourge speaks volumes about the sacrifice they are willing to render for the nation’s freedom, well being and honour. Nawaz said Pakistanis were equally aware of the supreme sacrifices rendered by internally displaced persons of tribal areas in wake of Operation Zarb-e-Azb.

“I wish to reassure them of our boundless support in ameliorating the difficulties experienced by them and will do our utmost to resettle them appropriately,” he added. While talking about the spirit of Eidul Azha the prime minister said, “The quintessential spirit of submitting unconditionally to the will of the Supreme Being is universal in content and timeless in context. Human being is uniquely blessed with the ultimate opportunity to exhibit his cherished devotion to his Creator.” “Muslim Ummah will yet again be given an opportunity to redeem its pledge of submission to Allah (SWT) on the auspicious occasion of Eidul Azha with the conviction that it will stay steadfast in its vows of submission. It will also be provided a chance to delve deep into its moorings that emphasise sacrifice for a superior cause as the epitome of human existence,” he emphasised.
It a show of support for democracy former president Asif Zardari had on Saturday said that the agenda of ‘anarchists’ will never succeed. The Pakistan People’s Party (PPP) co-chairman said his party would not compromise on supremacy of democracy and institutions. Zardari said the PPP was the party that created the constitution and it would protect it. – Dailytimes