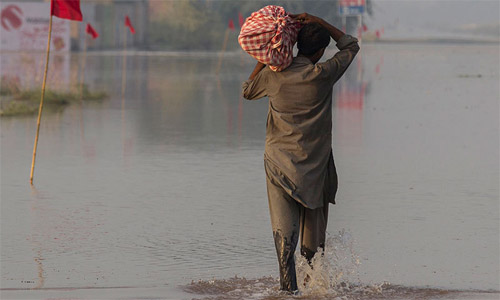 The Punjab government has revised the policy of disbursement of Rs25,000 to each and every family of the Calamity Affected Revenue Estate (CARE) villages and now only owners of the houses hit by flood or rains would be given compensation.

As per the previous arrangement, families residing in the area falling under the CARE category were entitled to the compensation irrespective of the fact that they suffered losses or not.

It is learnt that administrations in 17 flood-ravaged districts had expressed their serious concern over the previous policy at a meeting with the Punjab chief secretary last week. They had sought revision in the policy which, according to them, could cause resentment among the flood-tossed population. The government officials in their feedback to the provincial government said since people of the less affected areas had started protest demonstrations to get their villages included in the CARE category, the compensation policy should be revisited. [contentblock id=2 img=adsense.png]

At least 73 villages of the Gujrat district had been affected by the flood out of which 23 were declared as CARE and some 12,000 families had been enlisted in the category to receive the financial aid. However following the change in the government policy, now owners of some 1,100 houses are entitled to get Rs25,000 each from Oct 1 to 5 whereas the district government has reduced the disbursement counters from five to two.

Gujrat District Coordination Officer Liaquat Ali Chatha said three counters had been closed and now counters at Shahbazpur and Qasimabad would remain operational where the affected people would be given financial aid prior to Eid. He said in the second phase farmers who had lost their crops and livestock would be given cash support soon after Eid as crops on 18,300 acres got damaged in the district. -dawn