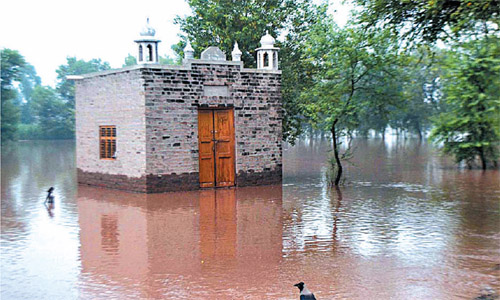 Out of 1,114 flood-hit houses in the district’s villages, some 600 have been declared the ‘worst-hit’ in a survey conducted by the Urban Unit of the Punjab government.

According to the survey report submitted to the provincial government, at least 385 houses have been washed away, whereas some 215 were 50pc to 70pc damaged. Similarly, the number of partially damaged houses is around 500.

In the initial report submitted by the district government, based on data collected till Sept 7, the number of damaged houses was 709, out of which only nine were said to be completely demolished and the remaining were declared half or partially damaged. The report also says some 1,200 tents have so far been distributed among the flood-affected people in the district. Punjab government then got conducted a fresh survey through it Urban Unit to get the ‘exact’ figures. [contentblock id=2 img=adsense.png]

The survey report has declared 73 villages flood-hit in the district out of which 23 are ‘the worst-hit’ where the Punjab government will give at least Rs25,000 to each affected family before Eid. According to official data, some 8,335 families in the ‘worst-hit’ areas will start getting financial assistance of Rs25,000 per Head of Household (HOH) from September 27.

District Officer (Coordination) Shuja Qutab Bhatti said the Bank of Punjab (BoP) would distribute the financial assistance among the flood-affected and for the purpose bank counters were being set up in Qasimabad, Shahbazpur, Marri Khokharan and Chak Sada areas.

He said the district government had also spent at least Rs27.8591 million on the compensation and relief activities out of the total Rs100 million special grant given to it by the Punjab government. So far, he said, Rs10m had been given as compensation to families of the six dead and four injured people, besides Rs17.8m spent on the relief activities. -dawn