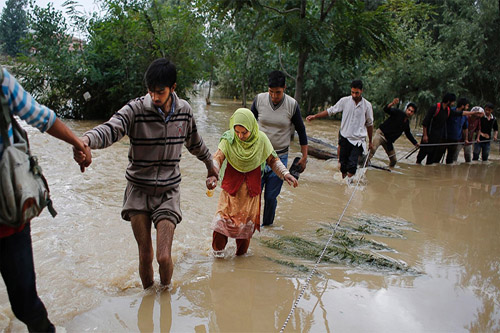 Hundreds of flood victims, belonging to various villages of Kamoki, held a protest against non-payment of compensation announced by the chief minister for them on GT Road, blocking traffic for many hours.

The protesters also alleged that the departments concerned had changed the direction of Nullah Dek on behalf of former MNA of PML-N Rana Nazir Ahmad, father of sitting MNA Rana Umar Nazir Khan and MPA of ruling party Qaisar Mehmood Sandhu, to save their crop fields which destroyed their protesters crops and incurred heavy losses. They said floodwater was still standing not only in their villages but also village Nathoke, Shadikhan and Aminpur Sayedan. [contentblock id=2 img=adsense.png]

Kamoki Assistant Commissioner Mohsin Bilal and former MNA-N Rana Nazir Ahmad tried to negotiate with protesters but they refused to talk to them. Later, MPA Rana Shamshad Ahmad Khan negotiated with protesters and assured them that they would get the compensation amount by Sept 27. At this, the protesters ended their protest. Scores of flood victims from village Noorpur and adjoining localities protested against the district and tehsil municipal administration against non-payment compensation and non-provision of relief goods and medicines on Sunday.

Talking to the media, they said a TMA Muridke official, named Iqbal, had collected their CNICs some days back, assuring them that compensation announced by the chief minister would be paid to them shortly. But after that no government official approached them in this connection, they said. The flood victims demanded the government provide them with relief goods and compensation. -dawn