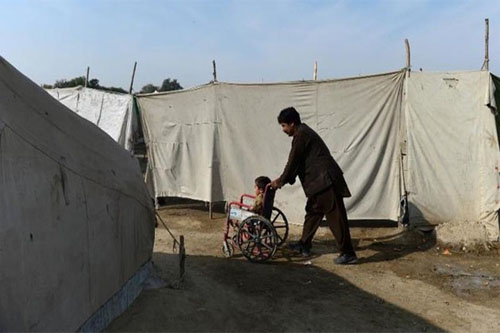 As many as 13 new cases of polio were confirmed on Tuesday by the Polio Virology Laboratory of the National Institute of Health, taking the total number of cases detected this year to 158. An official of the Prime Minister’s Monitoring and Coordination Cell for Polio said that seven of the cases were reported from the Federally Administered Tribal Areas (Fata), three from Khyber Pakhtunkhwa (KP) and one case each from Sindh, Punjab and Balochistan.

In 2012, he said, a total of 58 polio cases had been reported and in 2013 as many as 93 cases. The laboratory confirmed on Tuesday that one-year-old Shaqiba, daughter of Rangeen, was experiencing the onset of paralysis. The girl is a resident of Milward village of Khyber Agency. Thirty-month-old Mustafa, son of Saifullah, also belongs to the Milward village of Khyber Agency and is suffering from the same disease. The other children suffering from the disease are: 29-month-old Riaz, son of Ismail, a resident of Sara Cheena, Bara tehsil, Khyber Agency; 12-month-old Akhtar Bilal, son of Hazrat Ullah, a resident of Asad Khel village, Razmak tehsil, North Waziristan Agency (NWA);