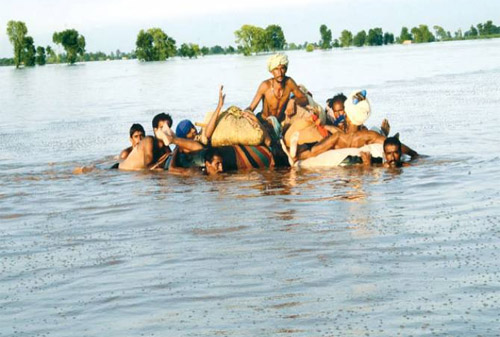 Thousands flee as dyke blown up to save Jhang

A 100-meter breach was caused in the Athara Hazari embankment on Wednesday morning to save Jhang city from the flooding and to protect Head Trimmu from what authorities called “total collapse”.  A massive area of 88,895 acres came under water in Jhang district, devastating lives and crops. Scores of villages were hit by a wave of water as high as over 8 feet.

Jhang was cut off from Faisalabad, Bhakkar, Layyah and Multan after the dyke breach by explosives.  Thousands of people fled their homes as the authorities blew up the dyke on the west bank of the River Chenab to save Head Trimmu and Jhang city.  In cracking the Athara Hazari dyke, the district administration exercised negligence, according to the locals who say the authorities were hesitant to break it early for unknown reasons.  Had the administration cracked it Tuesday night, the locals say, the cleft in Malhoana dyke near Wijhlana mauza would not have taken place and dozens of villages would have been saved.

The people affected by this cleft faced many troubles because they were not alerted to face flood. They were sleeping when suddenly the floodwater entered their houses after cleft developed a night before.  Officials said 200 villages in the area had been flooded as a result of the Athara Hazari dyke breach. Floods have affected more than one million people in Pakistan, where at least 257 lives have been claimed, officials said. Parts of Jhang as well as the surrounding area were fully flooded. Many people are taking refuge on dykes with their belongings piled around and their livestock tethered nearby.  Some used tractors to escape the rising waters, carrying ropes, beds and blankets. They have now improvised shelters on the dykes.  Rescue teams are still going out on boats to find stranded people. But the relief effort is patchy.

Teams of volunteers – some from religious groups – have been distributing food, water and medicines, but there’s only limited coordination and many displaced people say they have not yet received any help.  Survivors waded through waist-deep water to escape the floods, with many carrying children and household items on their shoulders as others dragged their livestock along behind them. Hundreds of others remained stranded on rooftops, waving for help to passing helicopters. Ahmad Kamal, the spokesman for Pakistan’s National Disaster Management Authority, said breach in the River Chenab embankment in Jhang followed a warning the day before.  After the breach at Athara Hazari dyke, ammunition has been fixed to blow up Doaba bund at Muzaffargarh. The next areas at risk are Multan, Khanewal and Toba Tek Singh.

Armymen are using boats and helicopters to drop food supplies to the stranded families and evacuate victims.  “We are focusing more on women, elderly people and children,” said Ahsan Ali, a rescue official in Jhang district. He said death toll due to floods has reached 257. In Bahawalpur, settlements near Panjnad have been evacuated after announcements in mosques, urging the people to move to safer places to avoid the expected flood. Head Trimmu is facing a flood of high level. The high flood has destroyed everything everywhere in district Jhang.  The district administration was persuading as well as forcing people to shift to safe places. Troops of Navy, Army and Air Force as well as 1122 officials are rescuing flood victims by helicopters and boats. The administration is repairing all protective dykes and the Faisalabad division commissioner is supervising this work. However, there are no satisfactory arrangements to provide food, medicines, drinking water, tents and other essential items to the flood victims.

All the roads, except Jhang–Faisalabad Road, have been blocked for traffic of all kind.  Meanwhile, Jamaat-e-Islami Amir Sirajul Haq also visited different relief camps, consoled the flood victims and promised to support them at all levels.  Punjab Chief Minister Shahbaz Sharif directed the authorities concerned to shift people, likely to be affected by floods, to safer places and ensure provision of food to them. He was chairing a meeting of Cabinet Committee for Flood Relief in Lahore. The committee reviewed the flow of water in rivers and rescue and relief activities in the province. He asked the authorities concerned to send more helicopters and boats to Jhang and Chiniot.  Meanwhile, on the direction of Shahbaz Sharif, four truckloads of relief goods were sent for the flood victims of Jhang district. Separately, Prime Minister Nawaz Sharif has decided to pay Rs 50,000 to each family of flood victims and all the DCOs throughout the province have been asked to provide the lists of the deceased in their respective areas.

According to sources, Nawaz Sharif has directed Baitul Maal Pakistan to provide Rs 50,000 to each affected family besides carrying out relief activities in flood-hit areas.  “At least 1,091,807 people were affected in Punjab and 31,800 in Azad Kashmir,” a senior official at the National Disaster Management Authority (NDMA) told AFP. The official said the affected people include those who were stranded in their houses or compounds and those who had fled their homes after floods hit their respective areas. The official said he feared that the figure of affected people might rise. A statement posted on the authority’s website confirmed the figure. -nation