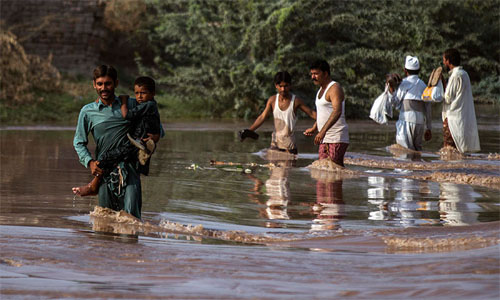 As widespread flooding ravages large parts of Punjab, Chief Minister Punjab Shahbaz Sharif announced on Thursday an aid package of Rs100 million to each district hit by the recent flash floods, according to a Radio Pakistan report. During a visit visit to affected areas in the Chiniot District, the chief minister said that it is the priority of the government to evacuate the stranded population to safe ground.

Shahbaz Sharif said that 90 per cent of the population had been evacuated from the area before the inundation occurred, and added that helicopters were employed to provide food and medicine for the displaced. The Punjab Cabinet Committee constituted for flood relief in a news conference today said the provincial government will provide Rs20,000 to each family displaced by floods before Eidul Azha. Committee Chairman Shuja Khanzada said 16 helicopters are being used to take trapped people to dry areas.

Punjab Food Minister Bilal Yasin said 184 people were killed in floods due to rain-related incidents and the provincial government announced aid of Rs2 billion for relief and uplifting of the stranded people. Another committee member Zaeem Qadri aid 140,000 people have been shifted to safer areas out of the estimated 1.8 million affected by the catastrophe. For rehabilitation purposes the government has constituted 500 relief camps, he added. The committee stated that it will unconditionally continue providing help to the flood-hit population.  After being hit by 21 major floods since 1950, it could be assumed that Pakistan would by now have an effective flood management and disaster relief plan in hand.

Unfortunately it is not the case. For the past three years, Pakistan has topped the list of the Global Climate Risk Index produced by Germanwatch, an NGO that works on global equity issues.  In 2010, Pakistan was listed as the number one country in the world affected by climate related disasters (due to the massive flooding that hit the country); in 2011 it was ranked as number three. Last year’s report listed Haiti, the Philippines and Pakistan as hardest hit by weather disasters in 2012. This year’s report will be launched at the UN Climate Change Conference to be held in Peru in December. The 2010 floods had killed approximately 2,000 people and caused a damage totaling over $10 billion. -dawn