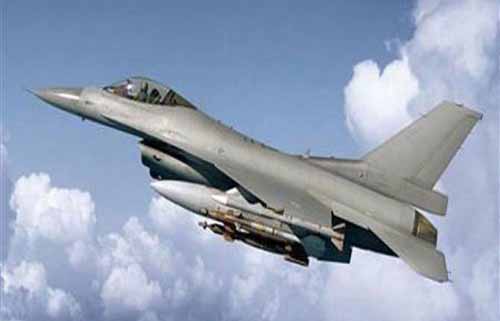 At least 65 terrorists were killed and three hideouts destroyed during two separate airstrikes in North Waziristan Agency (NWA) on Wednesday. According to security officials, Pakistan Air Force (PAF) jets carried out precision strikes in Shawwal and Dattakhel areas after getting credible intelligence about the presence of militants.

An ISPR statement said, Operation Zarb-e-Azb is progressing successfully. During the early morning airstrikes 30 militants were killed in Shawwal valley and two terrorist hideouts destroyed (there). The military mouthpiece claimed that in another action 35 suspected terrorists were killed in the northwest of Dattakhel. Three terrorist hideouts were also destroyed in precision strikes early on Wednesday. Dattakhel is considered a stronghold of terrorists and a targeted clearance operation is underway in the area. More airstrikes may be carried out in and around the area which has also been a scene of numerous US drone strikes in the past. Air strikes, artillery, mortars and ground troops have all been used to retake territory in North Waziristan, which had become a haven for the fighters of the TTP and other militant outfits.

The conflict zone is off-limits to journalists, so there is no way to independently verify the number and identity of those killed. The latest statement from the army comes as military operation Zarb-e-Azb is completing its third month. The Pak Army launched the operation on June 15 following a brazen militant attack on Jinnah International Airport Karachi and failure of peace talks between the government and TTP negotiators. The military said the major towns of Miranshah and Mir Ali had now been cleared of insurgents, along with a 90-kilometre (55-mile) road through North Waziristan. The semi-autonomous tribal areas on the Afghan border have for years been a hideout for militants of all stripes, including al-Qaeda and TTP as well as foreign fighters such as Uzbeks. Washington pressed Islamabad for years to take action to wipe out sanctuaries in North Waziristan, which militants have used to launch attacks on Nato forces in neighbouring Afghanistan.

The army announced earlier this month it had killed more than 900 militants and lost 82 soldiers since the start of the operation. Meanwhile, Chief of Army Staff General Raheel Sharif on Wednesday said that terrorists will be pursued even in the remotest areas and all their sanctuaries will be taken out. The army chief made this statement during a meeting with Air Chief Marshal Tahir Rafique Butt, Chief of Air Staff Pakistan Air Force, who visited GHQ and held a meeting with General Raheel. According to Inter-Services Public Relations (ISPR), both chiefs reviewed the progress of ongoing operation Zarb-e-Azb and discussed conduct of future operations. The air and army chiefs vowed to employ all resources for a joint campaign plan and ensure success of operation Zarb-e-Azb. Anwarullah Khan from Bajaur Agency adds:

A solider of Bajaur Levies Force escorting health workers was gunned down when unidentified armed men attacked a polio vaccination team in Bajaur Agency. Officials said the incident took place in the mountain area of Damadola, 20km northwest from Khar, the agency headquarters. Shah Naseem Khan, a senior administration official, said that health workers along with two Levies men were on their way towards a village to administer polio drops to children when unknown masked armed men opened fire on them. As a result, he said, a solider of Levies Force received critical injures and died before he could be taken to hospital while the health workers remained safe. The deceased Levies official was identified as Nawab Khan.

Soon after the attack, the troops also retaliated but attackers managed escape from the spot successfully. The people of nearby area and volunteers of the local defence committee also reached the spot soon after they heard gunshots and launched search operation in the area. Following the incident, senior officials of the administration of Bajaur Levies and security personal rushed to the site and cordoned off the area and started probe into the attack. The officials said the local health department after the directives of administration has immediately suspended the immunization drive in Damadola area. No one has claimed responsibility for the attack on polio team but the administration believed that militants could be responsible for the incident.