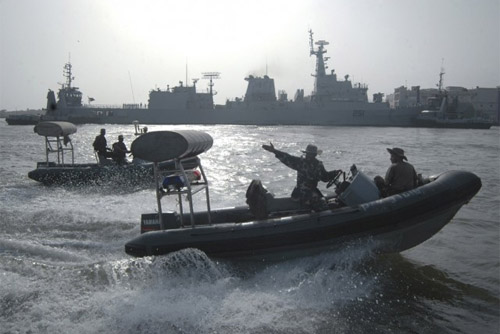 A shocking report was broken but belatedly about an outrageous terrorist attack on PNS Dockyard on Saturday night. The commandoes of Pakistan Navy launched an immediate operation and foiled the sabotage plan, killing two extremists and apprehended four others during the forceful retaliation.

According to sources, the assailants used the sea route to force their way into the PNS Dockyard taking advantage of darkness on Saturday night. According to sources, Pakistan Navy’s commandoes accomplished the sweeping operation in two hours and scotched the attack, killing two militants and collaring four others. A cache of munition including RPGs, hand grenades and pistols were recovered from the saboteurs.

Following the operation, the process to clear the PNS Dockyard was kicked off and after six hours of scouring, the dockyard was declared clear. It is pertinent to note here that the terrorists made an attempt to launch the attack in line with the onslaughts on Karachi Airport and Mehran Air Base. –SAMAA